A couple of weeks ago Greenwich Industrial History was contacted by campaigners at Atlas and Derrick Gardens. 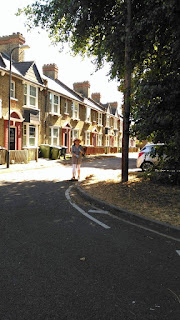 This small estate is now owned by Greenwich Council - and is in one of the more obscure bits of the borough.  It is down Anchor and Hope Lane, down among all the industrial sites and opposite the new Sainsbury's depot.   Difficult to find and tucked away.  Not for much longer!   There are plans by Rockwell Developers to surround it with 28 storey blocks of flats as Charlton sites go for 'redevelopment'.

(and incidentally swallowing up many other interesting sites, which may include the old Glenton railway - which still has some of its rails!)

Atlas and Derrick was built by Cory's around 1908.  Cory Environmental are still just along the river with their tug depot and dry dock just along the riverside path.  That small drab workplace - which looks after all the tugs which transport the rubbish barges - is a small part of a huge modern multi national.  Just down at Erith Cory have a vast rubbish destructor and much more.  The firm is said to have been set up by William Cory in the early 19th century and was initally a haulage and lighterage business.

I remain confused however by Cory and its background. In South Wales Cory Brothers operated a net work of mines and coal haulage.  There is even still a Cory Brass Band.  Are they the same people - or is it just a coincidence that there were two big companies in the coal trade in the 19th century set up by people with this fairly unusual name.  Other Corys pop up in directories and so on all the time - for example I found a Cory dye works in Limehouse in the 1820s. 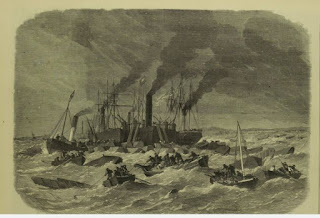 What is however well known - and well illustrated is Atlas (hence Atlas and Derrick Gardens). There were three successive Atlases and they were moored in the river off Charlton. The idea was to save river space and wharfage time.  The collier ships - of which there would have been 100s coming into the Thames from the North east coal staithes - moored up against Atlas and her derricks would have been used to remove the coal and transfer it into barges. And off the barges would go to deliver it to wherever it was to be used


In the early 19th Cory built these blocks of housing for their workers.  The current resident group have been looking through ideas of philanthropic and company housing - and it would be useful to them if they could contact a specialist in this subject.  I am aware of several estates built in this period for workers - one example up in Rotherhithe would be Moodkee Gardens built in twenty or so years later by South Metropolitan Gas.  and there are more recent example locally in Harvey Gardens and Prentis Court.

The estate is made up of two squares surrounding greens with lots of mature trees, The campaigners think that Derrick was built for the managers and Atlas for deputy managers and workers.

Atlas and Derrick is potentially a very pretty estate - it needs a bit of loving care. The campaign group are trying to find out more details about it - was their an architect?  What do people know about the estate and how can they find out more?? 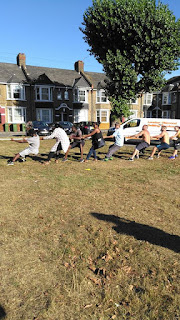 There is a short history of the estate and  Corys in Charlton in John Smith's History of Charlton - difficult to get but ok if you can.