Something personal - a prize trip up the river in 1914 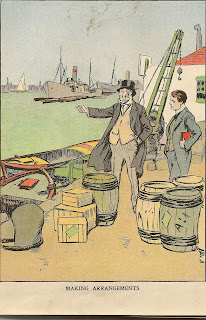 hope GIHS and its readers will indulge me in something personal. I am justifying it with some pictures of the working Thames before the Great War.....  but otherwise .....

In 1914 my Dad would have been six and attending Wrotham Road School in Gravesend - its still there. He won a prize that year 'for reading' - a book presented by Mrs. Huggins - who I assume was the Lady Mayoress of the day.

The book he won is now falling to bits - 'Our Holiday on a barge'  by Alice Talwin Morris.  I am not quite sure what Gravesend Education Committee thought a working class six year old would make of this story of a very middle class family holiday - but now, nearly 100 years later I am beginning to appreciate it. 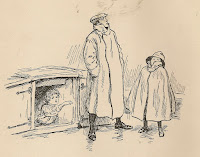 The story goes that the children - four of them, on the Swallows and Amazons model - want an outdoor holiday, so Father's nice boss, arranges for them all to go on one of the Company's barges, with his teenage son Archie - who also wants an outdoor life.  The barge is all fitted up and off they go. The book sort of suggests they go off into deepest countryside but, as Father commutes every day from his City job I would think its just a bit upriver of Windsor.

They have the usual adventures - a fright at the weir, meet a game keeper, go fishing, it rains ... and they are stared at by the village people who were clearly not used to middle class children.

What I really love about the book are the illustrations. I love the period feel of them, and in particular the clothes - the girls in black stockings, long sleeved sweaters and their hair tied back. Sunny hats. Father in his long raincoat, cap and stockings. And Mother with long belted skirt, and three quarter length coat - ever so fetching. Archie wears white trousers - even lying on the grass, and on the boat. I like the flatness of the drawings.  They are also not drawings which are 'childish' they are real life drawings, with no attempt to talk down to a young audience. 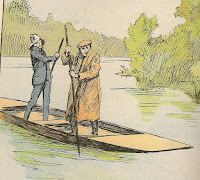 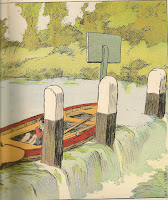 The book doesn't say who the artist is but it must have been Alice herself.  There isn't much about her on the net - but there is quite a bit about her husband, Talwin Morris. He was art editor for the publisher Blackie and an important innovator in book design.  Living in Glasgow they were deeply involved with Mackintosh and the Glasgow School of Art,.  He died only in his early 40s and Alice lived on publishing several children's books - all now going for vast prices on Amazon (but my copy is very very tatty). 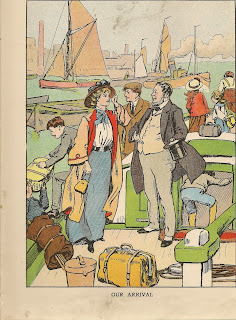