August is the cruellest month. More bits of news and stuff like that.

This post includes stuff that has come in over the past couple of weeks. August is usually a slack month - but there has just been a sudden rush!!
(sorry about some of the strange variations in type - have wasted 2 hours trying to sort)

FOGWOFT
New Plaque for Greenwich Foot Tunnel
On 5 July 2016 FOGWOFT members turned up at Cutty Sark Gardens to celebrate the unveiling of an interpretive plaque for the Greenwich Foot Tunnel. They were joined by a representative of the Institution of Civil Engineers. The ceremony was led by Deputy Leader Cllr. Danny Thorpe, whose staff had designed and commissioned the plaque. It will do a great job in explaining the history and original reasons for the historic foot tunnel. It may even answer the common visitor questions of whether this is a public lavatory or the Greenwich Observatory! It is the latest in a series of projects by the Royal Borough to enhance users experience of the tunnel.  FOGWOFThave been closely consulted about all three projects. Since the completion of the major refurbishment scheme in 2014, it would have been easy for the Borough to lose sight of the importance of this working heritage. It is to their credit that they have not; and fogwoft will continue to support innovative actions that improve both tunnels.

- We also note that the recent BBC thriller 'The Secret Agent' had its final scene down it the tunnel. Fame at last!! 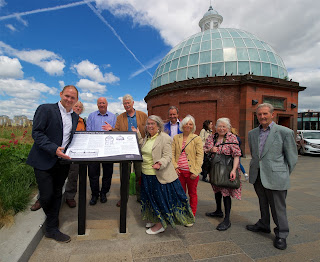 CROSSNESS RECORD
This issue starts with the exciting headline "The Great Stink Exhibition and the start of the Transformation of Crossness into a more formal museum" and continues " The Boiler House has been totally transformed with the introduction of the new National Lottery funded Great Stink exhibition. The exhibition tells the story of why Crossness and the London sewer system was built and the prevention of the spread of Cholera. It also depicts how Crossness was built and comes right up to date with the new Thames Water Treatment Plant" - this apparently includes murals on the walls of the cafe and toilets, a display of old toilets and a new mock sewer tunnel with 'visual and sound effects'.

They also have pictures of their transformed garden - plus a swan and a pheasant who ' struts around .. as if he owns the place'.

More seriously there is an article about Easton and Anderson (based in Southwark and then Erith) and their links to construction and equipment at Crossness.

see more (and all the pictures) at www.crossness.org.uk

In both cases they have sent us pdfs of the desk stop study and work programme -
please get onto us if you are interested.

The Enderby Group is keeping an eye on the Alcatel site study
but the Pipers Wharf site is the more worrying.  The site has been
completely cleared of many items of great interest before work has
started and the archaeologists pre-report seems totally unaware
of the various works and wharves which were once on the site.

ENDERBY
The Enderby Group have been very busy - they have been
undertaking a footfall survey on the riverside path - which has
sadly been cut short by the sudden closure of the path round
Pipers Wharf.    They have also been preparing their own vision
document for the future of the area. And challenging the listing
designation of Enderby House. More on all of this to come.

We have just had the following link from British Transport
Treasures (thank you Stuart)
http://www.britishtransporttreasures.com/product/three-hundred-years-on-londons-river-the-hays-wharf-story-1651-1951-by-aytoun-ellis-the-bodley-head-1952ebook/

FRIENDS OF GREENWICH PARK
their summer newsletter includes some details from the
Community archaeological dig on the Old Keeper's Cottage.
Included is a note from Brian Starkey
about the occupants of the cottage in the mid 19th century.
One of them was an important Fellow of the Society of
Antiquaries!!

------------------------------
GREENWICH SOCIETY
The  July/August Newsletter has
-  a brief write up of the (lost) planning battle on the
Old Loyal Britons in Thames Street.
-   a brief note about the remains of the Tudor/Stuart jetty
on the foreshore OF the University site.
- noted (thank you) the new plaque with information on the
Greenwich Foot Tunnel with a nice picture.

GLIAS NEWSLETTER
They note the inauguration of the plaque for the foot tunnel.
Otherwise - nothing about Greenwich and Woolwich!

The following meetings are noted:

GLIAS WALK - this is round Erith and led by Andrew Turner.
1st October,.  to book a place email walks@glias.org.uk

WOOLWICH ANTIQUARIANS NEWSLETTER
The main article in their current newsletter is about the
Greenwich Heritage Centre's events around nursing
in the Great War.

They mention conservation cases current in Woolwich -
the Granada Cinema and the Guard House.

There is a feature on Gilbert's Pit and the new stairway
access to it. Visits via  larry.blake@royalgreenwich.gov.uk.
This is a Site of Special Scientific Interest and part of
the London Geodiversity Partnership. It was used as a
source of sand for local glassworks and the Arsenal.

The Antiquarians also have a nice obituary to Barbara Ludlow.

WELLING & DISTRICT
MODEL ENGINEERING SOCIETY
Rochester Way, adjacent to Falconwood Station,   www.wdmes.co.uk
Steam and electric hauled model railway.
Sundays, 2 – 5 pm  14,28 Aug  11,25 Sept  9 Oct.
NAVAL DOCKYARD SOCIETY
Now - sometime ago the Naval Dockyards people asked
me if  someone could arrange a walk for them round the
military and naval sites in Woolwich - now, that seemed
a tall order and at first it seemed that if you wanted a
THOROUGH look at Woolwich you had better book a
week - because it would take three days minimum
- however - I put them in  touch with Ian Bull  - and -

... So - they went on their walk with Ian - who took them
round the more easily reached bits and there is a terrific
write up in their newsletter. I am very tempted to quote much
of it - but - roughly - they saw - 'railway subway ... quite
an impressive structure' ....... 'impressive brick built
chimney'.....  'steam factory .. wonderful example'....
'boat store .. utmost importance' ..... 'Clockhouse ...
impressive looking building' ....'impressive columns of
the main gate' ....'many buildings of historical interest'
'Dial Arch for lunch' ...'Royal Brass Foundry ..
unusual and well looked after' ...'all very
impressive' ..
Well - glad they were impressed - and
thank you to Ian.

This is the national newsletter from the Association for
Industrial Archaeology. This is really more about the
provinces -not London - but there are a series of articles
in the current issue about the challenges which local
societies meet as well as meetings with Members of
Parliament - happy to pass on to any one
interested.
Along with the GLIAS newsletter they feature the
Kirkaldy Testing Museum in Southwark Street, SE1 -
and if you haven't been there yet - go at once. Its about
FACTS not OPINIONS.
As the London representative on the AIA Dr. Robert
Carr has provided his usual article on London's
industrial history -but sadly nothing about Greenwich
this time.
There is however a report on the Enderby Group's March
seminar - happy to copy and pass onto to anyone
interested.


I am not going to reproduce their list of meetings -

but happy to send to anyone interested in IA
conferences in Kansas City, Romania, Lisbon or even Devizes.

GREENWICH VISITOR
The current issue headlines 'Engineers baffled as icon
fails after 133 yrs' - hope the time ball is sorted by the time
I am writing this. There is a whole page about the inauguration
of the foot tunnel  plaque -and thanks very much GV for that!!!
They also highlight a little known techie interest
attraction in Greenwich - the Aviation Experience
which is down at the cable car
(which of course pretends to be an airline).

and - as I write this, the following tweet has come in from "Russell Thomas ‏
‏@Gashistory  Once the largest #gasholder in the world @ #Greenwich 1904
#Advert for Clayton Son & Co." 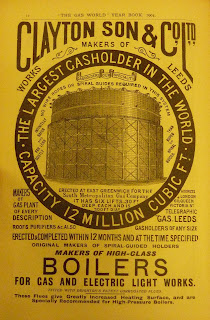 so - this is a lot longer than I thought - must get some lunch -
sorry if its a bit strange, I had a lot of problems with word-wrap - which has led to me having to put in manual line breaks - but also with fonts and type sizes. I have typed some of this four times and it is still not consistent
Mary for GIHS