News from around and about

We are getting information about plans to fill in the Arsenal Canal. More information here when we get it. Meanwhile https://fromthemurkydepths.wordpress.com/2016/03/17/plumstead-station-area-to-be-upgraded-though-royal-arsenal-canal-to-go/#comment-2098

GLIAS NEWSLETTER
They are advertising as follows
20th April GLIAS lecture Restoration of Historic Buildings from an Engineers Perspective by James Miller
18th May AGM 6.15 followed the Heritage of a City at Play. Simon Inglis
both at 75 Cowcross Street, EC1
and
2 July - Walk on Railways and Buildings of Woolwich Arsenal and Dockyard with Don Kennedy.  book via walks@glias.org.uk

The GLIAS Newsletter also contains a report on the Enderby Group's seminar with links to various sites with information on it.   This is essentially the same report which has appeared on this web site (largely because both were written by me).
Other items covered in the newsletter have already been covered here - one of them is an excellent review of the Museum of London's Archaeology Unit study of the Thames Ironworks site which lies opposite the Greenwich Peninsula, the road name change in Bexley to Bazalgette Way, and the admirable GooseyGoo.   There is a link to a project trying to list all letter boxes in Britain (115,000 of them)  http://www.lbsg.org/


*** AND - we have news that the latest GLIAS Journal is out. We haven't seen it yet BUT we understand it contains two articles about Crossness  - The Other Steam Engines at Crossness by David Dawson and The Native Guano Co at Crossness by Owen Ward

BYGONE KENT
Need to catch up with this - and will go through several back issues and report on what they say about Greenwich!
Meanwhile - this year.
Vol.37 No.1. a  nice review of my Innovations booklet - thank you Pat
Vol.37, No.2. Features a big article about Enderby Wharf.

WOOLWICH ANTIQUARIANS NEWSLETTER
This has a brief note about the Welling and District Model Engineering Society (at Falconwood, just in Greenwich by a tiny margin) www.wdmes.co.uk
Steam and electric hauled railway open Sundays 2-5 pm  April 24, May 8,22, June 5,19, July 3,17,31. August 14,28  September 11,25, October 9th. They are at the back of the electricity transformer station at Falconwood


THE LENOX PROJECT
Come and meet this project to build a historic warship on 23rd April,  They have an event with the Sayes Garden people in the foyer of the Deptford Lounge 12.30-3 (the Lounge is round the back of Deptford Church Street somewhere).  They have also produced 'The Lenox Project Vision. A lasting legacy for Deptford' which can be downloaded from their website. http://www.buildthelenox.org/

LETTER FROM NORFOLK
A reader from Norfolk has sent us his memories of Norton's Barge Yard on the Greenwich Peninsula "Over 40 years ago the organisation of the conversion of Thalatta at Norton's (for a youth organisation) watched in Astoundment as Dick heaped nearly 3/4 of a century of the succession of Kentish and (Bugsby's Hole) misc paperwork in a bonfire at H.T.M. despite the protests of the teller. I have often shared opinions as to how much Social History and REAL INDUSTRY  was missed by this singular act of frustration and broken dreams  - I greatly doubt if this witness is still alive if so her would be into his nineties.  Best regards for the unrecorded real TRADESMEN  who are long gone but not forgotten"


ENDERBY GROUP - had heard from some editing Briscoe's Journal of his Antarctic voyages for Enderbys - more on this when we know more.

HISTORIC ENGLAND
Write to tell us that this will start soon Subject: Land at Enderby Wharf, Christchurch Way: 15/3844/SD (LAG/011/391) CLO16536 (Enderby Group are of course aware of this)

ENDERBY GROUP
Sorry to keep on about them (or us as we are otherwise known). We were very happy to welcome Bill Burns from the US to our last committee meeting. Bill is a long distance member of the committee and he runs the very excellent http://atlantic-cable.com/

LITTLE EASTERN
Delighted to learn that at the time Brunel's Great Eastern was being launched in Millwall, that a tug was launched by a Greenwich Shipbuilder, called Little Eastern.
There are some details about her on http://thamestugs.co.uk  but not which Greenwich shipbuilder was responsible - any info welcome

GREENWICH PARK RESERVOIR
Richard draws attention to the picture of the Greenwich Park Reservoir which won a Royal Institution of Chartered Surveyors award and is featured in (of all places!!) Greenwich Time.
on 29th March.  Congratulations on the award, and the picture - and it would be good if Greenwich Time took a bit of interest in something like this again.
Elizabeth comments " the next reservoir northwards is interesting. The building is said to have been designed by Robert Hooke (the listing says Nicholas Hawksmoor but thoughts may have moved on). Anyone know the current state of research. 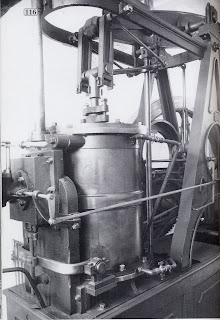 As part of my research into this Greenwich engineer - I did a talk about him to GIHS on Tuesday and happy to repeat this - I have been trying to find out more about a steam engine which he built which is in store at the Beamish Museum in Durham.  I understand from them that it is owned by Tyne and Tees Museum Service and are waiting for information back from them.  The engine dates from 1849 and came from the Glemsford Silk Mill.  Pic below. Any information we would be grateful - it is not his signature rotary engine though.

Dartford Trevithick Day.
This is on May 7th with a show in Central Park Dartford, and then on the 8th a steam parade in Dartford High Street
www.trevithicksindustrialdartford.co.uk


Historic England Angel Awards now open for nominations
Since 2011, the Historic England Angel Awards have recognised the efforts of local people and groups who go to great lengths to preserve their heritage. The 2016 Angel Awards are nowÂ open for applications. You can apply for yourself, or you can nominate another person or group.
There are five award categories to apply for in 2016: Best community action project, Best contribution to a heritage project by young people, Best research project, Best rescue of a heritage site, utstanding contribution to heritage
Read about the full award criteria and eligibility here.
The shortlist, as chosen by a panel of experts, will be named in the summer and the winners will be announced during a glittering prize ceremony that will take place in the autumn.
Find out about previous winners and shortlisted entries of the Historic England Angel Awards here.
(hope these links work, sorry if they don't)