Siemens Brothers was one of the most important of our local industries. Although they closed as long ago as 1968 the Engineering Society attached to the works has continued to meet until very recently.  As mentioned in an earlier post we have just received a supplementary volume to their original report published in 2009.
This supplement is packed with interesting information about the Woolwich works - but before we go on here is a copy of their front page, a brief history of the Company so that we all know where we are.

A brief history of the Company 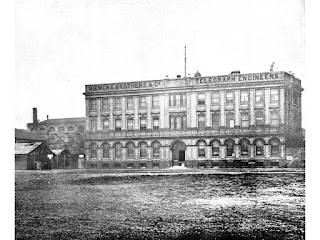 William Siemens first conducted business in London in 1843 and in 1847 became an Agent for Siemens & Halske. This company had been established in Germany that year by his elder brother Wemer and Johann Georg Halske, a highly skilled mechanical engineer. Siemens & Halske had established a telegraph factory in Berlin, but it became clear that London needed a permanent staff, warehouse and workshop and thus in 1858 the Siemens & Halske Company was founded in London, England. William, Wemer and Halske (who apart from being a partner, was also in charge ofthe workshop) paid in £1000 each.


In 1863 with continued expansion, Siemens & Halske of London bought a piece of land on the Thames in Woolwich and built on it a cable factory, a mechanical workshop and stores. In 1865 Halske withdrew his support from the Company; largely as a consequence of William and Halske's disagreements over the risks involved in the cable business. The two remaining partners, William and Werner Siemens, took over the assets of Siemens & Halske and re-registered the business as Siemens Brothers, London. Siemens Brothers became a Limited Company in 1880 and pioneered research, development, engineering and manufacture of Electrical Cables, Telegraph, Telephone, Signalling and Measuring Apparatus, Wireless Equipment, Lamps, Lights and Batteries. 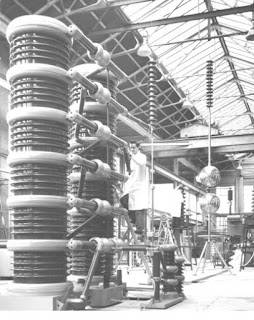 
In 1958 the Company celebrated its Centenary and was honoured with a visit by HRH The Duke of Edinburgh. However the period 1958-1968 heralded many changes in the manufacturing industry. Siemens Brothers became Siemens Edison Swan, a part of the Associated Electrical Industries (AEI) Group, and was then renamed AEI Telecommunications. This period was coincident with the emergence of electronics and the Company again played a pioneering role in the design, development, manufacture and installation of the first electronic telephone exchanges. AEI was in turn taken over by GEC which led to the closure of the Woolwich Works in 1968. Ironically this closure was due mainly to serious over capacity in Britain's power generation manufacturing companies at a period when the ex-Siemens telecommunications business was flourishing.
Brian Middlemiss

Missed out the fact that in 1914 it was seized by the British government as enemy property and so became independent of the German operation. And the German company set up again, separately, after WW1, and that business was seized all over again in WW2.