GIHS was sent a query about the Greenwich Park Bandstand - this had been to a number of people and organisations - here is the response from one of our members - Barbara Holland
(and thanks Barbara. Hope this is ok.)


A question has been raised regarding why the name Deane & Co. is stamped into the columns of the bandstand in Greenwich Park when it has been generally accepted that it was made by the Coalbrookdale Company.  I have done some research into Deane & Co., and based on this have proposed two theories that might throw some light on this ‘mystery’. 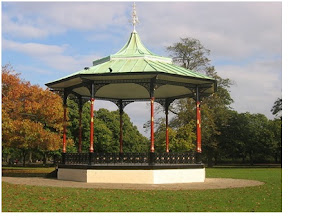 
The lettering  - ‘DEANE & CO LONDON’ - can be seen on the base of each of the columns which join the decorative cast iron panelsand support the roof made by the Coalbrookdale Company : 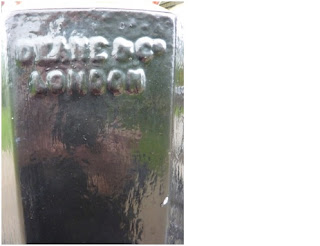 Deane & Co. were a long-established business – their advertising (1868) claims they started in 1700 – manufacturing and selling a wide range of metal products: 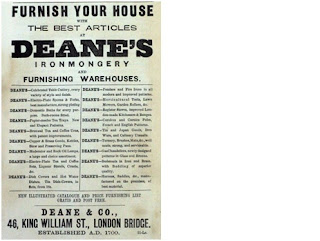 I can find mention of them as far back as 1785 at 39 Fish Hill Street in the City of London, as a patent shot warehouse, with a George Deane (born 1745) described as a hardwareman (ironmonger).In 1799 their main business appears to be gunmaking, with the company run by George and son Edward Deane (born 1777 in Fish Street Hill).  In 1803 the company had moved to 41 Fish Hill Street at the corner of Arthur Street.  The 1819 Post Office Directory has it listed as John & George Deane, hardwaremen, and Pigot’s Directory of 1825/26 as George Deane, Birmingham and Sheffield Warehouse. 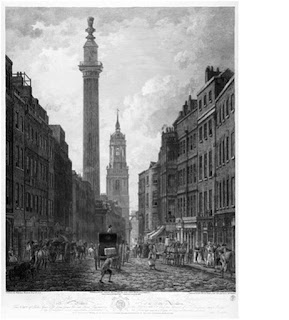 
In 1838, the business moved again to 46 King William Street and is listed as a gun and pistol warehouse, ironmonger, cutler and jeweller.  In 1846 the gunmaking side moved to 30 King William Street. At this time, George and John Deane formed a number of partnerships that diversified into stove and range making at 86 Chiswell Street, and saddle making at 2, Arthur Street East. They were well-renowned gunmakers, appointed as gunmakers to Prince Albert in 1848, and exhibited at the Great Exhibition in 1851.

In 1853 the firm won a bronze medal for a fowling piece at the New York Exhibition, and in 1855 a Prize medal at the Paris Universal Exhibition ("carabines, rifles et fusils de chasse, pistolet et revolver"). 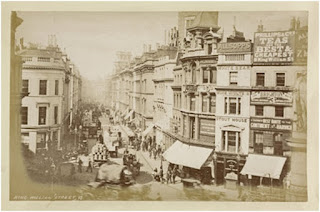 
The hardware and ironmongery side of the business continued to trade successfully from 46 King William Street until 1890, but the gunmaking part was sold in 1873. The Deane’s had sold up by 1890 to retire, and the site acquired by the City & South London Electric Railway Company for the building of the King William Street Station.  This was the northern terminus of the world’s first deep-level underground electric railway which ran from Stockwell and had 6 stations.  The station opened on 18th December 1890, closing in 1900 when the line was extended to Moorgate.


So, what are my theories?   Is it possible that the columns on the bandstand were supplied separately, as a sub-contract maybe, by Deane & Co. and the panels, roof etc by the Coalbrookdale Company? Or, somewhat less likely, were the columns salvaged from Deane &Co’s premises when they made way for the new King William Street underground station?  The bandstand was erected in 1891, just after the company closed.


I’d be interested in hearing what other people think?

I research Old London Bridge and believe that an ancestor of George Deane father of John, named William had a hardware Shop on London Bridge in 1700 and that is the reference to the company's early founding.