The Story of Subsea Telecommunications and its Association with Enderby House
by Stewart Ash
Review by Richard Buchanon
The Enderby Group has commissioned a number of histories of the site - which will eventually be available. The text to two of them is on Bill Burns Atlantic Cable web site (link at the end of this posting).  Below is a review of the first of these, kindly contributed by Richard Buchanon, and hopefully a review of a work on the Enderby family will follow (that also is on Bill's web site).  Below also are links to works about the site by Stewart Ash and posted on the Ballast Quay web site. Works  by another author will probably posted here as unsuitable for anywhere else. ﻿

Mr Ash gives a detailed description of a fascinating story.


He sets the scene by defining three eras of subsea cable communication:


1986 until today, and into the future: the Optical era


In 1850 the first, British, cable was laid across the English Channel, completing a telegraph link from London to Paris.  It soon failed, but lessons were learnt, another was successfully laid the next year and soon several cables were laid on short European sea routes.


Americans wanted a link too.  Cyrus West Field initiated the project in 1857 to link the United States to Britain, using British expertise for design and manufacture.  Two manufactures each made half the Cable; one loaded onto USS Niagara, the other onto HMS Agamemnon.  The lay began but was abandoned when the cable broke.  More cable was made to replace what had been lost, and in 1858 a second lay was successful – but signals on the new link became weaker and soon ceased altogether.  Thorough investigation led to a report in 1861 which outlined a way forward.  Mr Field saw his project come to fruition in 1866.


Mr Ash then describes how cables were made at the time.


Gutta Percha, amongst many other uses, had been found to be an ideal insulant for subsea cables.  First introduced to Europe in 1842, it is prepared from the resin of trees that grow in SE Asia.  In 1845 the Gutta Percha Company was set up to manufacture gutta percha goods.  For subsea cables they supplied lengths of a core comprising a copper centre conductor coated in gutta percha.

﻿﻿
Cable manufacturers spliced the lengths of core together, and added armour wires around the core both for strength and to resist abrasion on the seabed.  The armour wires were developed from steel wire used in ropes already being used in coal mines, and for standing rigging in ships.  One of the principal wire rope manufacturers expanded onto a site at Morden Wharf in Greenwich where they concentrated on cable manufacture.  Known from 1854 as Glass Elliot & Co, they provided half the cable for the 1857 transatlantic cable, and the extra cable needed in 1858.


Increasing business engendered further expansion.  Just upstream of Morden Wharf was Enderby Wharf, where hemp ropes and sails had been made for shipping.  However in 1845 it had a devastating fire.  Charles Enderby, then running the business, did not restore the factory but did build a dwelling house: Enderby House, still extant, though he did not live there long.  In 1857 Glass Elliot & Co bought the premises; they moved their management offices to Enderby House.


It was clearly desirable to bring the manufacturing processes together.  In 1864 the Gutta Percha Co and Glass Elliot & Co merged as the Telegraph Construction & Maintenance Co (Telcon).

﻿﻿﻿﻿﻿﻿
The next year cable for a third transatlantic system was made, by Telcon.  This was loaded onto the Great Eastern, Brunel’s passenger ship having been converted for cable laying, and big enough to take the cable for the entire system.  This cable too broke, but in 1866 the Great Eastern successfully laid a fourth cable – and then recovered the 1865 cable and completed that system too.  Global expansion followed, with cables to the far-east and Australia.  At the beginning of the 20th century the Pacific was crossed.

﻿﻿
The traffic a cable can carry depends on how high a frequency can be transmitted.  Telcon developed a special alloy called mumetal, which they used to make a tape to wrap around the central conductor to increase the rate at which messages could be sent.  This led to more business as older cables were replaced, mainly in the inter-war period.  Two further improvements came with the development of coaxial cable, where a high conductivity sheath is put on the cable core (originally as a helically wound copper tape), under the armouring; and, beginning in 1930s, the replacement of gutta percha with polythene.


Telcon merged with the subsea cable division of Siemens (hitherto a rival in Woolwich) in 1935 to form Submarine Cables Ltd (SCL).  Standard Telephones & Cables (STC) in North Woolwich entered the subsea cable business in 1950 – later, in 1970, taking over SCL.  In each case Enderby House remained at the centre of the business.  STC ceased making cable at Greenwich in 1975, in favour of their Southampton cable factory, but continued with repeater and terminal equipment manufacture.


Over short routes even a telegraph cable can carry a telephone channel, and this was done as early as the 1890s.  However telephony needs much higher transmission frequencies than telegraphy.  Even with coaxial cable in the 1940s it was necessary have an amplifier to counteract cable losses, just to cross the North Sea.  Several needs arose: a waterproof casing to house the amplifier; a means of feeding power to it over the cable; and sufficiently reliable components for the amplifier.  An amplifier is unidirectional, so to achieve two-way transmission filters are used to separate a low frequency band from a high frequency band, the bands providing go and return directions.  The amplifier and associated circuits in a casing is termed a repeater.

﻿﻿
Crossing the Atlantic needed many repeaters: Bell Labs in America did the design work for the first such system, and successfully tested it between Havana and Key West in 1950 – the date generally accepted as marking the beginning of the Telephone era.  The first Trans-Atlantic Telephone (TAT-1) system soon followed, with American repeaters spliced into coaxial cable - mostly made by SCL.  It could carry 36 telephone channels.  Designs rapidly advanced, SCL and STC both developing their own repeaters, and installing systems worldwide, around the British Commonwealth and elsewhere.  Channel capacity increased to 160 channels in 1967 and 5680 channels by 1977.

﻿
Systems are laid with repeaters already spliced into the cable.  The cable cannot just be let go, but has to be retarded to match the passage of the ship over the seabed; the design of paying out equipment is a discipline in its own right.  Equipment for telegraph cables had a series of large diameter sheaves, the cable taken under one and over the next.  Mr Ash describes how a rigid repeater in the cable can be laid – using legacy equipment - then goes on to say how a modern design does the job.


Cable systems are designed for a 25 year life, but the occasional fault does occur.  There are sufficient cables round the world for traffic to be re-routed round outages, but service is slowed until faults are repaired.  Cables can be broken by geological activity on the seabed (avoided by judicious route planning), by dragging ships anchors, but mainly by fishing.  Cables are now buried where they cross fishing grounds, not only on continental shelves but down to depths of 1500m – plough design for this is another speciality described in this account.


Satellites in the 1960s provided considerable competition for 160 channel cable systems, but as the capability of cables improved this diminished – particularly with the development of optical fibre cables.  Today, satellites are regarded as complementary to optical fibre systems - in providing mobile services; though their share of total traffic is less than five percent.

﻿﻿﻿﻿
Charles Kao began his career at STC, later moving to the firm’s research laboratories – here he and George Hockham developed the idea that information could be carried by light waves guided by a glass fibre.  This they published in a paper in 1966.  By 1980 fibre loss had been sufficiently reduced for a short sea trial, and further improvements in the purity of fibre materials led to the first optical fibre system from the UK to Belgium in 1986.  The cable was designed with six fibres in the centre of the cable, surrounded by a metallic tube – which protected the fibres, but also conducted power feed current to the three repeaters.  These really were repeaters: the incoming digital signal was detected, regenerated and retransmitted as a repeat of the original.  As the regenerators were unidirectional a pair was needed for two-way transmission, working over a pair of fibres. 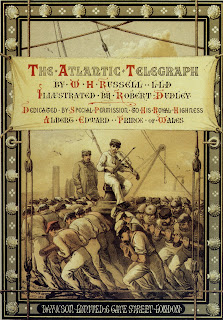 Also in 1986, the Erbium Doped Fibre Amplifier (EDFA) was first demonstrated at Southampton University.  It comprises a length of optical fibre doped with erbium, a rare earth element; when pumped by a laser this will amplify a signal passing through it, the signal being at wavelength in a band around 1550 nanometres.  A pair of fibres is again needed for two-way transmission.  EDFA development took time, but made for a much simpler repeater.  The EDFA can simultaneously handle multiple wavelengths in the 1550 nm band (a regenerator could only handle a single wavelength).  Current systems offer transmission of a hundred data streams, each of 100 gigabits/sec on a single fibre pair (over 25,000 times the highest capacity of co-axial systems); and typically have two or four fibre pairs.

﻿﻿
The story ends with a look at the present situation, and possibilities for the future of Enderby House.  STC has, through industry mergers, become part of Alcatel-Lucent; they make still make repeaters and terminal equipment, but not needing the whole site to do so, have sold the riverside part – including Enderby House - to a housing developer, who is currently surrounding it with large blocks of flats.  Mainly because of its historical significance, Enderby House has a Grade II listing; obliging the developer to refurbish the house.  There is also a proposal to build a cruise liner terminal next to Enderby House.


The Enderby Group has recently been formed to promote Enderby House as a centre for telling the story of its history and heritage – both local and industrial.  It was in at the beginning of international communications, soon becoming the centre of them, and is the sole remaining site in the UK still active today.


The Story of Subsea Telecommunications and its Association with Enderby House