The London County Council's Central Tram Depot was in Charlton. People might remember it better as the 'Airfix Building' in Feltram Way (Mr. Fell was the Department's Head).  There were considerable remains still there in the 1980s, and it would be interesting to know if this is still the case.
The following is extracts from an article on London Trams in Wonders of World Engineering  Part 32. Undated but probably mid-1930s.

GIHS has never had a speaker on any of the various tram related sites in Charlton and Greenwich and are anxious to hear from volunteers!


"The overhauling and repair of such a fleet is a big task requiring three works, which are at Hendon, West Ham and Charlton. Those at Charlton are the largest of their type in Great Britain. They occupy some seven acres and are planned to deal, if necessary, with all the cars in service during the course of a year. Every car: has to be examined annually and certified to the Ministry of Transport before it is relicensed for public service. Generally a car is given a complete overhaul, occupying about thirteen days, every second year.


The work is divided into two sections, one dealing with the body and the other with the truck and the motors. When the car arrives a schedule of the work to be done is circulated with the vehicle to all the shops. The first task is to lift the body from the trucks by an electric hoist, and to replace the worn trucks and motors by reconditioned ones. Then the car is placed on the body shop ropeway. During its journey through the shop the body work, wiring and electrical equipment are examined and repaired, if necessary.


The controllers are replaced, power and lighting cables are tested; circuit- breakers and switches are removed and recalibrated on a specially designed motor generator set. Trolley bases, booms and heads are replaced annually with overhauled units. Fittings and furniture such as seat cushions are dealt with in another section. If the work cannot be completed in scheduled time the car is withdrawn from the routine schedule and passed to the auxiliary body shop. Meanwhile, sections of framing consisting of complete side frames, platforms and top cover vestibule ends are assembled ready for fitting. When this has been done the car is delivered at the paint shop on another ropeway. Two tracks accommodate six cars each, and extend into a drying chamber with a capacity of six cars. The cars are washed down and given one coat of paint and one of varnish, double-tier scaffolding enabling both decks to be painted simultaneously. The interiors are floodlit" so that portable lamps are not needed.


Seats are cleaned by an apparatus which combines beating and suction. The seats rest on a chain conveyer table which passes through a sheet-iron cabinet, inside which leather thongs on revolving drums beat the seat, half the drums turning in a vertical plane and half in a horizontal plane. The dust is removed by an exhauster fan and passed through a duct to dust-collecting filter bags outside the building. Compressed air jets in the base of the cabinet clean the underside of the seat and disturb dust on the ledges of seat frames. 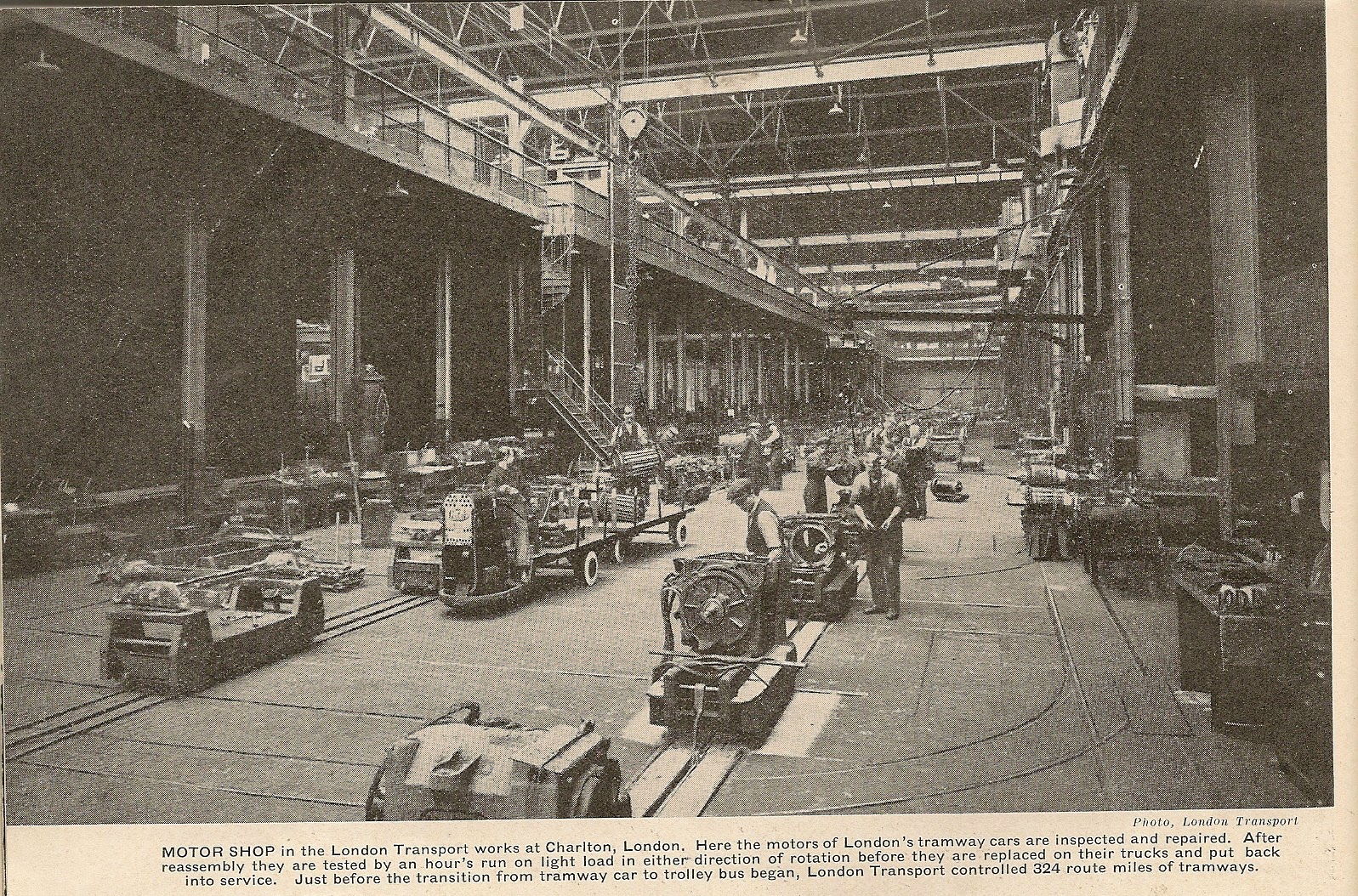 Motors and trucks are dismantled on the truck shop roadway. The motors are inspected and repaired in an adjoining shop and reassembled. They are tested by an hour's run on light load in either direction of rotation 'before they are replaced on the trucks.


SOME 28,500 ploughs are overhauled and about 1,500 new ones are made in a year. The plough shop consists of three moving tables, a loading platform and two hydraulic presses. The plough is placed on a conveyer and during a journey of about 50 feet it is stripped of defective parts. At the end of the table hydraulic presses remove rivets and re-rivet the friction plates, and the plough is then placed on one of the two conveyers moving in the opposite direction. On the return journey the shoes are replaced and the fuses and top contacts are put into working order. Axles are
tested for cracks by the electro-magnetic method.   A powerful electro-magnet magnetises a part, over which a solution of iron filings and paraffin is poured. If there is a fracture the filings form in a small heap across the gap and reveal it. Magnetic brake shoes are produced by a two-unit plant, each unit having four machines, one for bar-cutting,' one for piano-milling one for four-spindle drilling and tapping, and one for cropping. In the wheel shop independent grinding machines deal with re-tyred wheels and with tyres on which the flats are not so deep as to make grinding too costly, A wheel-lathe re- moves flats and reforms flanges. Before wheel tyres are shrunk on to the centres they are expanded by electric tyre-heating transformers. Worn tyres are removed by oxy-coal-gas cutters. The welding shop is equipped with electric welding machines and transformers, and oxy-acetylene welding apparatus. Other sections include the smiths' shop, foundry, woodworking shop, sections for electrical and light repairs, and sections for printing destination blinds. Stores and auxiliary services are accommodated also. Apart from Charlton and the other works there are the depots where the tramway cars are housed, cleaned and maintained, and where minor repairs are executed. The maintenance of the rails and the wires is another big task.
**Caption - "Removing the body of a tramway car from its trucks by means of an electric hoist.  The work of an overhaul shop is divided into two sections, one dealing with the body and the other with the truck and motors. The truck and motors are replaced with reconditioned pats and the body is placed on a ropeway which conveys it through the various sections of the body shop.  Here body work, wiring  and electrical equipment are examined.
All photo credits are to London Transport