What has Southwark Council done with George Livesey's statue?? 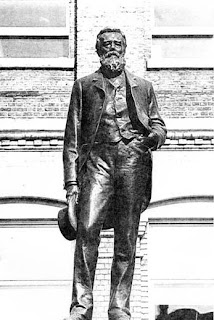 What has happened to Sir George Livesey’s Statue?


I didn’t ought to go on about George Livesey at length – although I could do so since he was the subject of my M.Phil and I might be a bit obsessive.

George Livesey was a local gas works manager –and in Greenwich he founded and largely designed the world class East Greenwich Gas Works. He also revolutionised the 19th century gas industry and was a great man generally– he was also a national figure in the temperance movement.

He was also more than a bit of a trouble maker …. he wasn’t particularly posh, had no formal education, and was very, very clever. He has become known as a strike breaker (true) but he also had a lot of ideas about society and property ownership which were unusual, to say the least, for a Victorian industrialist.  He was a very long way from the top hatted Victorian capitalist he became in so many 1980s agitprop plays.

His statue stood outside his beloved Old Kent Road gas works – and a couple of years ago was craned over the road to the Livesey Museum – which has now closed – and since then everything has gone very, very quiet.

The Livesey Museum was originally a library which George gave to the people of Camberwell.  Southwark Council closed the Library some years ago and turned it into a children’s museum, which they recently stopped funding. It turns out that our George had foreseen possible sales of property and library closures when he gave it to the council 110 years ago, so he tangled up the ownership in such a way that Southwark don’t actually own it. A users campaign was started about the museum closure - but they have proved difficult to talk to, to put it mildly.

So – about the statue.
﻿ The Sculptor was Frederick William Pomeroy – who also did that cracking statue of QueenVictoria in Woolwich Town Hall. He was the major sculptor of his day and anything by him is pretty important. It was cast in bronze – which I suppose means we should watch out that it doesn’t go the same way as the recent dreadful fate of Rotherhithe’s Dr. Salter (although for all we know it has already gone!!)

It was cast at the foundry of J.W. Singer and Sons at Thames Ditton –and there is lots of information about them around. They were also pretty important.

George stands on a granite pedestal and it says

SIR GEORGE THOMAS LIVESEY. M.l.C.E. ENTERED THE SOUTH METROPOLITAN GAS COMPANY 1848. BECAME ENGINEER, BECAME DIRECTOR 1882 AND IN 1885 CHAIRMAN, A POSITION HE OCCUPIED UNTIL HIS DEATH. HE ENRICHED THE GAS INDUSTRY BY MANY INVENTIONS, WAS A STRENUOUS ADVOCATE OF THE SLIDING SCALE, AND IN 1889 FOUNDED THE CO-PARTNERSHIP OF THE COMPANY. THIS MONUMENT WAS ERECTED TO HIS MEMORY BY THE SHAREHOLDERS, OFFICERS AND WORKMEN, 1909.
﻿﻿
Signed and dated, P. W. POMEROY. A.R.A.SC1- 1909
Unveiled: Friday 8 December 1911, by Earl Grey
Exhibited: 1910, London, Royal Academy of Arts

I am very happy to explain stuff from that inscription – the sliding scale, co-partnership and also Earl Grey, In fact I would be delighted to do so. Also please note that George started work in Old Kent Road Gas Works at the age of 14.


﻿ The official unveiling was not until 8 December 1911 – and another mystery which has haunted me for years is that a film was apparently made of the occasion. If so it is one very valuable bit of early film and gas industry history– I have asked and asked and asked about it. It must have been kept at Old Kent Road –what happened to it?

I feel very strongly that we need to keep making a fuss about this. Livesey was a great man – albeit one with a besmirched record. He spent most of his life in the Old Kent Road – moving there when he was 5 and working there for the rest of his life. However – he doesn’t just belong to Southwark - he was born in Islington – and he created an industrial empire for all of South London.

Built on the Greenwich Peninsula his revolutionary East Greenwich gas works is now much derided – ‘polluted, nasty’- but, if we stand back more objectively, we should realise it was also a great achievement in terms of technology, management planning, public service and workforce involvement. In its day it was a major showpiece – something to aspire to. We have here the largest remaining of his monumental and revolutionary gasholders – but there is no mention anywhere on the Peninsula of George and his work.

When the Dome was first built there were lots of stories around about it being haunted by Livesey's ghost - fanned, I am sorry to say, by various people and some press officers.   I did a number of TV and radio interviews about him at the time.

So – what has London Borough of Southwark done with George Livesey’s Statue – and (if it still exists) what do they intend to do with it?

PS - By the way – I am more than happy to give talks on George Livesey, his work, his ideas – and the strike breaking. I have lots of pictures and much other stuff –including cut out and build paper gasholders. I deposited a lot of papers –including a half written biography – at Southwark’s John Harvard Library some years ago.
Posted by M at 07:13

Is there any connection between Pomeroy (the sculptor) and Pomeroy Street in New Cross?

For many years now I have seen a big bronze statue of a gentleman leaning against a wall behind the Walworth Road. It is visible only from the train going south from The Elephant and Castle, and then only for a three second glimpse. Will try hard to see it better in case it is your statue.

Did you not check with Southwark Council?

It's still at the museum and never left. The building may have closed but the statue remains.

Brodie
there are a whole lot of issues here - like what is its future - its quite valuable, not only as an art work but also as scrap, I'm afraid - do Southwark care about it?? - couldn't it go somewhere else (like Greenwich??). Whatever and wherever it is its an important depiction of an important man, and the neglect is a scandal

You will be pleased to know that the Livesey Museum is no longer closed. Treasure House, a small educational establishment for Southwark students whose needs have not been met by large mainstream schools, has now found its permanent home there. It has been repaired and we have painted it, making it a lovely space to work in. The local community will be able to hire large or small rooms for community groups, and other activities. We are planning a launching day some time when all the painting is complete. It is available to the community once again - and George Livesey's statue is safe in the garden. Next year will be 125 years since the library was first opened and made available to the community!

Does anyone happen to know the whereabouts of the Birmingham Gold medal awarded to George Livesey in 1882 by the Gas Institute for services to the industry?

Howard - interested to know why you want to know?? I can post a query about this onto a gas history interest page - and I also understand some descendants of Frank Livesey are around who may have something. But - are you a gas historian?? or a family member? yourself.


Out of interest (I'm researching the Thames Ditton foundry), do you know if the statue was cast by J.W. Singer and Sons at Frome, or by A.B. Burton at Thames Ditton?.

It was Singer, also they originally commissioned a marble statue!

What happened to the Livesey institute (on the other side of the road from the museum and a little further up towards Canal turn)? I recall going there at lunchtimes in the mid/late 1970s for a beer and game of snooker when I worked at the OKR gas works site before they opened a bar (over the canteen) in the works itself.