Roads and their uses have always been a subject of interest to industrial historians - they all exist to fulfil a need of some sort and are of all ages from estate roads built in the past few weeks to serve a new development to ancient trackways whose origins can only be speculated on. We tend to take them all for granted.

In a recent edition of the Woolwich Antiquarians newsletter Richard Buchanan has looked at Eltham Road. He takes as his starting point an old Ordnance Survey map of Blackheath and comments that it which shows what we know as 'Hare& Billet Road' marked as "Eltham Road".

Of course, as he points out, what we know today as Eltham Road runs from the Old Tiger's Head Pub at Lee Green to Eltham Green and then up a road called Eltham Hill into Eltham itself. Thus he points that changes in modern road patterns have disguised the medieval direct route from the Dover Road at the top of Blackheath Hill to Eltham.

"The medieval Eltham Road is just under four miles long" and on its route had to cross the Kid Brook "which it did where the railway bridge in Blackheath Village is now" and it also had to cross the River Quaggy "which is bridged in Lee Road just before the Old Tiger's Head Pub".
The destination - Eltham Palace

Eltham Road begins at the point at which the road from Greenwich coming via Croom's Hill meets the Dover Road. He notes that "There were, ofcourse Royal Palaces at both Greenwich and Eltham and domestic supplies normally went by road between them and the Tower of London, as the Court progressed from one to another".

Royal necessities could have course come from London by river via Greenwich, or "possibly with smaller boats along the Ravensbourne &. Quaggy to Lee" and in all cases "needing the Eltham Road for the last stretch to Eltham" and "ordinary trade to London would have followed the same route." Post also used the Eltham Road since "postal services developed from Royal message carrying arrangements" and "the Eltham Road continued to be used in the 17th century as an early route for theRoyal Mail.

Richard finishes with an note about how changes in the functions of an area change the sort of routes we need. "Nowadays to go to Eltham from Blackheath Hill one would take theShooters Hill Road across the Heath before turning right, perhaps not until reaching the South Circular road from Woolwich" and concludes that "The Woolwich connection became the main one as industry developed" - and of course, although he does not say so, the demise of Eltham Palace as a place of R 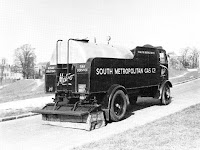