The following pictures are of the Fort Matilda torpedo factory in Greenock- now used by community groups and commercial organisations as a trading estate.


From web sites we learn that a railway tunnel was constructed to Fort Matilda railway station - this was an old coastal gun emplacement. The excavated material from the tunnel was used as landfill on an area which became the playing fields known as Battery Park - and which are still there today. 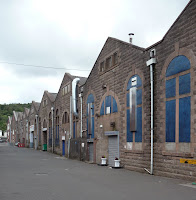 In 1907 the Admiralty bought some of this land for the Clyde Torpedo Factory. This opened in 1910 and 700 workers were transferred from the Royal Arsenal, Woolwich. They worked on the design and testing of torpedoes. which tests were undertaken in Loch Long - which is across a stretch of water from the factory. During the Second World War torpedoes were made here.

This transfer of manufacturing capacity of technologies developed in Woolwich from the Arsenal to sites elsewhere in the country was not uncommon - green field sites gave space for expansion. Other London industries also moved. Shipbuilding is a prime example, moving out of London in the later 19th and early 20th century to sites in the north of England and Scotland. 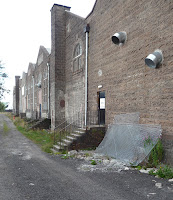 More info on any of this is welcome - including anything about any influences that this influx of Woolwich people may have had on this Scottish coastal town.

Don't know anything about this I'm afraid but the wider question of the circulation of labour from Woolwich elsewhere is interesting. I had ancestors who worked at the Arsenal but then my great grandparents ended up in Faversham (Oare) at the munitions factory there.

Hi The following is a link to a 1960s picture of the housing that was built in an "English" syle for the incoming workers in Greenock. These were known locally as the Avenues