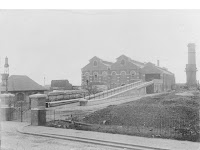 The purchase of three 300 1HP boilers would be required, but these would need to be modified if the Committee went ahead with proposals for a Dust Destructor to work in tandem with conventional generating plant. A set of 192 pipe "Economisers” were to be provided also.
A visit to St Helens and Darwin, of Members, Surveyor and Electrical Engineer, was proposed to view the operation of Dust Destructors worked jointly with Electricity Stations. The estimated cost of installing an electric street lighting scheme, including street cabling and lights (£l 6,250), but excluding buildings (£17,294), was £40,432.

To receive a report of the Electrical Installations Visits Committee.
Frank Sumner the Surveyor, and John B. Mitchell, the Electrical Engineer ' accompanied the Committee. The Deputation took the 1200 train from Euston to Liverpool on 25th May 1900.

Reports
1. Liverpool, St. Domingo Road, Station. This plant burnt only refuse to generate electricity, and had 4 boilers and 8 cells. The plant burnt 100 tons of rubbish per day; the steam generated was 1 Ib. per 1 Ib. of refuse. The low efficiency rate was attributed to the amount of waste gases not used in the flue, and the lack of sufficient heating surface in the boiler. The station was to power tramways and street lighting
2. Liverpool, Smithdown Park Station. This unit is similar to the other with 8 cells. The throughput is 80 tons per day; the steam generated was 1 lb. per 1 lb. of refuse. The reason for the poor performance was similar to above, but their engineer felt that more electricity could be generated if there was more boiler power. Service costs were £50 pa.

3. St Helens, Cropper Hill Station. This unit was a Dust Destructor run in tandem with a dedicated Electricity Works. This plant had been the subject of a learned lecture, by Sir William Preece, and had the most advanced aids to efficiency: Tower Water Coolers, Economisers, Condensers &c. The Dust Destructor apparatus was built by Meldrum Bros. The throughput is 30 tons per day; the steam generated was 1 1/2 lb. per 1 lb. of refuse. It was felt that this rate could not be sustained because of the labour requirements, and because of the increased rate of depreciation it would cause. 9 1/2 tons had to be burnt at night to maintain throughput, but this had to be put in batteries because of low demand.
There was no problem associated with tandem working. The Destructor portion is quite distinct from the Engine and Dynamo Rooms, and no inconvenience was caused by the dust. The labour costs per ton were not known at the visit, so Frank Sumner, the Surveyor, added a footnote to the agenda, saying that he had found out that the costs was 1s 1 ¾ d. per ton.
The Electrical Engineer observed that efficiency could be significantly improved by providing extra boilers so that valuable heat wasted in the flues could be captured. He also strongly urged the deputation to obtain the tram traction loadings for St Helens Trams. This being of the utmost importance because of the emerging LCC tram network that would also require power.
4. Darwen Station. This unit was fuelled solely with refuse, and serves only street lighting, not trams. The refuse was received at a high level, in an enclosed shed, so that there was no paper and rubbish flying about. The rubbish goes down enclosed shoots to the floor below, where it is loaded by labourers into the furnace. This produced steam generated of 1 2/3/4 lb. per 1 lb. of refuse burnt. This was said to be a little more costly at 1s 1d to 1s 2d per ton, but allowed the most efficient generation of heat, at 200 lbs. per square inch.
The Engine Room was attractive with, walls lined in Opalite, window dressings and the arches inside were of Leeds faience, the floor being mosaic. The important point for the Deputation was, that without any other fuel than refuse, it was doing all that the Plumstead Engineer's scheme expected to do for the first 12 months, but without the use of a single ounce of coal.
The Darwen Station processed 32.5 tons of refuse a day, and at efficiency of 1.5 lbs. f steam per 1 lb. of rubbish, the generating capacity of electricity exceeded demand, and steam was being wasted

The deputation was then treated to an excellent high tea in the town Hall.

At the meeting of the 31st May, thanks were given to Mr. Sumner for his careful planning of the tour that enabled so much to be seen in such a short time.

The Committee recommended that the Dust Destructor be erected in conjunction with the Electricity Works.

Lighting Committee, Plumstead Vestry, 19 July 1900
It was recommended that the Electrical Engineer's specifications for Boiler House Plant; Engine-House Plant; Street Work, be printed, and that invitations to tender be placed in, "Engineer"; "Engineering"; "Electrical Review"; and "Lighting".

Lighting Committee. Plumstead Vestry, 6 September 1900
Many companies submitting tenders had problems with the "Schedule of hours of labour and rates of wages" contained in the invitation to tender. The schedule specified hourly rates, and many companies wanted to pay workers by piecework rates. The Vestry would not vary its Conditions of Tender.
The Committee was considering the question of acquiring the site for a wharf on the River Bank. They wrote to the Under-Secretary of State for War, because of his interest in the Woolwich Arsenal land between the two sites. A plan was attached showing the proposals for a tramway connecting these sites across War Department land.

It was recommended that the tender of Wheeler Condenser Company, be accepted.
Horizontal Surface Condenser with 9 inch centrifugal pump and Cooling Tower
(Barnard Steel Tower with forced draught) @ 2,313

Electricity Committee, Woolwich Borough Council, 15 November 1900
It was reported that the Dust Destructor / Electricity Station was a project in an advanced stage of development, for which the London County Council, (LCC) had agreed loans.

Electricity Committee. Woolwich Borough. 6 December 1900
Part "A" The Borough Accountant reported on particulars of LCC Electric Lighting Loans:
The present practice of the London County Council is to sanction Loans and make advances for Plant, Machinery and Buildings for the generating and supply of electric light and energy for a period of 42 years, repayable on either the Annuity System or the Installment System.
For land, buildings, culverts, bare copper mains, and royalty licenses, they can advance loans for 50 years on the Installment System and for boilers and all other purposes for 20 years.
No loans for renewals are allowed under the 42 years' system of repayment whatever, either Annuity or Installment, but they have been granted for renewals if the amount is take up on the 50 years' or 20 years' basis.
The Dust Destructor portion of the Loan must be repaid in the ordinary way within the lift of the work, as certified by the London County Council's Engineer, and the equated periods of 42 years and 50 and 20 years do not apply, nor is any deferred payment of principal allowed.
The Committee directed that enquiries be made of three quantity surveyors, for their terms for taking out the quantities of the Dust Destructor / Electricity station and reporting back prior to the next Council meeting.
Part "B" The acceptance of the tender by Wm. Body for the Heater Detartiser and Well Pumps assumed acceptance of "rates of pay and Hours ". A revised estimate was received increasing this by £100, to £1,356 to include these matters. This was still the cheapest quote and was accepted.
A similar problem arose with the "labour conditions" element of the tender for the Steam Dynamos, Booster etc. British Westinghouse accepted the conditions, but the sub-contractor for the engine, Willans, would not on principle. Their engine was judged to be the best. Therefore they were allowed to accept similar clauses as those used by the Battersea Vestry.
Similarly James White would only accept the "labour conditions” for work carried out at Plumstead. They were the only manufacturers of the required "switchboard, connections etc” and the condition was waived for that work done in Scotland. Johnson & Phillips tender for Arc Lamps and Posts at £845 was accepted. However, once accepted realised that the original Vestry tender document contained "labour conditions" and asked to increase their tender price by £300. This proposal was not entertained.
In all 17 items of expenditure for plant in the Dust destructor / Electricity Station, totalling £20,000 were accepted, 15 of which fully embodied the "labour conditions".

The Council made an offer of £80,000 for the Woolwich Electric Supply Co., so that supply would be under public control.

Letters had been received from the following:
29 04 1901 Board of Trade. Additional regulations for ensuring the proper and sufficient supply of electrical energy.
02 05 1901 Local Government Board. Approval of site for Electricity works.
6 & 1005 1901 London County Council. Loan for free wiring purposes.
11 & 14 05 1901 Woolwich & District Lighting Co. Directors will recommend shareholders to accept the Council's offer for the undertaking.

The Borough Electrical Engineer (BE) reported various satisfactory tests on newly installed plant. The Borough Engineer reported alterations to the chimneystack that would save between £600 & £700. Smith & Sons, contractor for the buildings, asked to increase their tender price by £200 because they had forgotten to allow for Portland Stone, the BE refused this, The BE has engaged Mr. W.Martin as Clerk of Works for £4.10s a week.

The "trial bore "for the plant's well. This was sunk to a depth of 49 foot 6 inches.
feet inches core sample of strata
1 3 top spit
4 6 brown clay
3 6 peat
0 3 silty sands
3 9 grey ballast
3 3 sand and ballast
2 10 rich ballast
2 6 sharp sand
9 6 grey sand
The report concluded that if the well depth was limited to 45 feet, then the water would not have penetrated the chalk strata, and the water would be much less hard, and would cause less scaling of the boilers and pipes.
When the water from the actual well was tested late in 1903, the water was found to be hard and this caused much distress, because of the need for remedial measures.
A sub-committee was appointed to deal with deviation of contract price.

To consider a BE report on the need to anticipate substantial increases in future demand. It was stated that the engine room would need to be extended eastwards within three years. A temporary stop end would cost £266. To build the proposed extension now in advance of need would cost £1,350. There would be an overall saving of £467 by building as part of the present contract. The Committee agreed to the proposal to build in advance of need in anticipation of future demand.

Hello,
There are many different varieties of cranes on the market today, both in terms of size and type. Each type and size serves a different function.