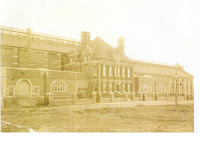 This is the first part of an account of Woolwich's first CHP system in the late 19th century. Dave Ramsay has spent many years resarching this and Woolwich's engineer and architect, Frank Sumner.
The White Hart depot was used for many years by the Council as a store and is now part of a trading estate. See it from the train between Plumstead and Abbey Wood stations - Greenwich's most obscure listed building.

The Woolwich and Plumstead areas had a history of radical thinking, self help and questioning officialdom. The Woolwich Building Society was founded in 1847; the Royal Arsenal Co-operative Society (RACS) was founded in 1868; and the Woolwich Polytechnic in 1890. It was against this background that a period of imaginative municipal construction and acquisition took place in the area, during the early 1900s.

Attempts by Queen's College, Oxford, in 1871, to enclose Plumstead Common, extinguish free access and grazing rights, led to the establishment of the "Commons Protection League". In 1876 fences on the Common were torn down in what was described as the "Plumstead Common Riots", and the leader was imprisoned. The resolve and support of the populace was strengthened by this and after further unrest a face saving device had to be found to release him. An Act of Parliament in 1877 authorised the purchase of Plumstead Common, Bostall Heath, and Shoulder Mutton Green, by the Metropolitan Board of Works, (2)"Discover Woolwich", D.Spurgeon).

Workers from the Royal Arsenal fed up with high prices and adulterated food set up their own buyer's co-operative in 1868, operating at first from members houses in Plumstead, and then as the RACS from 147 Powis Street. The ethic of members self help, produced a thriving network of shops and some food production units in the area by 1900. The RACS had a broader ethical remit and provided education and libraries for members. From 1900 onwards the RACS built hundreds of fine terraced houses, some of which were rented out to members and some sold on 99 year leases.

There was therefore a solid record of local achievement for radical thinkers. The issue of an eight hour day for Arsenal Workers occupied trade union activity. However, in the election for Woolwich Council in November 1900, of the 36 councillors, just 11 members of the Woolwich and Plumstead Progressive Association represented radical thinking on the Council. The area was thought to be a bastion of support for the Conservative Party, (1) "The Woolwich Labour Party, 1903-1953".

These were formative years for the Labour Representation Committee. In July 1901 its candidate defeated the sitting Conservative MP in a by election for the Borough Council's, St. Mary's Ward. In another Council by election in the following year, the Rev. Jenkins Jones won St. Margaret’s Ward for Labour. In a Parliamentary by election in March 1903, Will Crooks became the Labour MP for Woolwich. He was the fourth Labour M.P.to be elected. In November 1903 Labour won a majority on Woolwich Borough Council, which it held to 1906.

During this period the vexed issue of a public baths for Plumstead was settled when Labour decided to build the Baths. During this period also Labour built the first council houses, in North Woolwich. The rise of a reforming Labour Party reflected the needs of urban people who wanted progress in their lives. The minimum wage of 30 shillings a week set by the Council in these years was followed by a similar increase in Arsenal Labourers' wages. The provision of decent public amenity for all had long been popular. Any successful local politician would have had to reflect this when forming electoral policy.

Local Government in the Metropolis was to be reorganised. Eltham Plumstead and Woolwich were to be amalgamated into the Metropolitan Borough of Woolwich. Civic pride would have dictated that Plumstead Vestry would have wanted to hand over an administration with good civic amenity. Vigorous but prudent pursuit of the interests of Plumstead people would not harm the electoral chances of the scheme's promoters

The logistical problems of disposing of urban waste were difficult and getting worse, as urban building continued apace. Gas street lighting was expensive to run and out of the control of the Vestry, as the gas had to be bought off of the Gas Company. Civic building required bricks and paviors particularly for highway work. It was in this context that Plumstead Vestry investigated the possibilities of building its own power station to supply electricity.

Visits were organised to electricity stations in Leyton, Shoreditch, St Pancras and Brighton. The station at Brighton was thought to be most valuable, particularly in terms of charging mechanisms. It was decided to proceed with a station at Plumstead.

It was felt that the most important action to be taken was the appointment of really able, professional staff. It was decided to appoint an Engineer-Surveyor and an Electrical Engineer. These staff could advise on issues of best practice from around the country. The Committee wanted to investigate the benefits of building a combined refuse destructor and electricity station. In this way, Professor Robson recommended that the waste heat from the burning of rubbish could be used to supplement that produced by the coal burning electricity station. Frank Sumner was appointed Engineer-Surveyor and Arthur Wright Surveyor-Electrical Engineer.

In May 1900 the Committee looked at Frank Sumner's draft plans. Technical details were discussed, as was the need to cater for future expansion in demand. In order to pursue the "combined station” concept visits were to be arranged to inspect working examples of these plants.

In late May of that year four such stations were visited, two at Liverpool, one at St Helens, and one at Darwen. The Committee thanked Mr. Sumner for his careful planning of the visit. The main conclusion was that the combined station was a good idea, as they wanted to maximise the energy capture. To this end it was decided to load the refuse boiler manually, rather than the cheaper top loading by tipping. This method was more labour intensive and slightly more costly, but gave much better rates of burn efficiency. All of the boilers were to be of a compatible type.

Once the plans had been adopted, specifications were to be printed so that the tendering process could begin. It is interesting that Plumstead Vestry Rules insisted that a "schedule of hours of labour and rates of wages" should be included in all tender documents. Plumstead appears to have been an authority prominent improving working conditions prior to the formation of the Labour Party. It could be in that the Labour Party developed so rapidly in Woolwich and Plumstead because its ideals struck a chord with an established radical tradition that was seeking a vehicle to move forwards.

The new Woolwich Borough Council moved diligently to give effect to the plans it inherited from Plumstead. To ensure the public control of electricity supply in the Borough, Woolwich Borough offered £80,000 for the outright purchase of the Woolwich Electric Company. This fell within its powers that were recently given to local government. An application for a preliminary "Electric Lighting Loan" of £20,000 was made by the Vestry to the London County Council. Their sense of urgency of committing the Authority contractually to the scheme, prior to its absorption into the Metropolitan Borough of Woolwich some two months later.

The sense of civic and professional pride in the project is communicated from the Committee minutes. The tenders for boilers and water cooling tower equipment were accepted just days before Plumstead Vestry ceased to exist as an authority.

Woolwich Borough Council did accept the scheme and it was pursued with similar vigour. Tenders were accepted very often on the basis of engineering excellence, rather than lowest bid. The "Labour Condition" clauses were adhered to save for the generators, where the unique engineering qualities of this Glasgow product received ascendance. Local companies like Johnson & Phillips, were prominent in the list of successful tenderers. The plant and street cabling made up about £40,000 of the £60,000 cost of the overall cost of the project. Council Officers arid Councillors checked the progress of the construction and installation of the Station.

Plans for a tramway giving direct access for coal from a Thameside Wharf via a tramway to the power station, had to be objections from the MOD, the intermediate land owner. It was decided to source boiler water supply by sinking a well. The depth was surveyed carefully to ensure that "soft" water could be obtained at 45 feet. Sadly in the years between the 1900 survey and opening in 1903 circumstances seem to have altered so that the water obtained was found to be "hard" which shortened the life of the boilers. It may well be that at that time many people sunk similar wells and this reduced the level of the water table in London.

During the three year building period the flexible design had to be extended to cope with increases in demand for electricity. The Co-op and Footscray UDC wanted to buy electricity. Rates of pay for employees were fixed at 1/2 pence above the average at 8 pence for stokers. The two Labour members were able to insist that all hours worked over eight hours would be paid as overtime. There must have already been a radical element on Woolwich Council since Labour did not have a majority until the October 1903 election, by which time the Plumstead Combined Station was due to open.


Electric Supply Committee. Plumstead Vestry, Saturday 14 January 1899
Reports were given on previous Committee visits to installations at Leyton; Shoreditch; St. Pancras; and Brighton, in late 1898. The purpose was to establish the kind of installation most suitable to Plumstead. The Brighton operation was thought to be the best.
Electricity was cheaper than gas, its Id against 15s 9d, for street lighting. The Committee was mindful of the advice of Prof. Robinson that steam produced from burning the rubbish, could be used to supplement that produced in the dedicated boilers of the electric generation plant. The Committee was mindful to establish a joint dust destructor/electric generator.

Electric Supply Committee, Plumstead Vestry, 8 March 1900
The Surveyor-Engineer & the Electrical Engineer were given joint powers to appoint an assistant
Lighting Committee. Plumstead Vestry, 10 May 1900
In connection with the Electric Light Provisional Order obtained by the Vestry, the Committee considered the Electrical Engineer's report. The only alteration to the report was to increase the generating capacity of the plant, so that more electricity could be produced, to meet future demand. It was felt that this would eventually prove to be the most economical course.
The Committee required that the plant be "readily adaptable to future extensions". The designs prepared by Frank Sumner, the Surveyor and Engineer had to reflect this. The Surveyor also recommended that the walls of the engine room be faced with white glazed bricks, to eliminate the need for periodic lime washing of the walls. This would be safer for the operatives and the machinery
More to come
Posted by M at 20:39

thanks for this historical information in this post.
Valentines decorations | Valentine’s party

Do you know where i can get the floor plans for this building, im a student and very intrested in the buildings story.