Blackwall Power Station was constructed on a small (three acre) site at the North West end of River Way.  The switch house, laboratory, drawing office, and office block were on the opposite side of the road. Being such a small site, the dust precipitators were unusually installed on the boiler house roof, from where you could look down onto the gas works site to the North West.

The jetty at the end of the road covered the circulating water intake and there were two jetty cranes for unloading the colliers.  The Station would have required about 1200 tons of coal/day.  The coal stock area was also at the river end of the main building.

Blackwall Point was the first London power station to be designed and built exclusively to be fired by pulverised fuel.  Coal from overhead bunkers, was ground to a talcum powder level of fineness by Babcock and Wilcox E type pressurised mills, and transported to the furnace by Primary Air fans.  Combustion was regulated by the then popular Bailey Control System.

The boilers were standard Babcock steam generators with economiser, static air pre- heaters and forced draught and induced draft fans.  Ash handling used the Babcock Hydrojet system for furnace bottom ash and fly ash.  Full load would have produced about 150 tons/day and this was removed by road.

The Turbo-alternators ran at 3000 rpm and consisted of one HP cylinder exhausting into a duplex LP cylinder and finally into a transverse condenser directly below.  Normally, the condenser vacuum would be at least 29 inches of mercury.

The first manager, then known as the Station Superintendent, was a Mr. Arthur Cox, who I believe, was promoted from Barking Power Station.  The early post war years saw Britain sadly ill equipped for electricity production and design standards were ordered by the Chairman of the newly nationalised industry, Walter Citrine.

Firstly 30mw machines and soon after 60mw machines, as at Brunswick Wharf, on the opposite side of the river.  Each machine was operated by two men with two more men running the associated boiler.  Today's practice is for two men only to operate a complete boiler /turbine unit of 660mw capacity.  That is a change in about 30 years from 7.5mw/man to 330mw/ man. 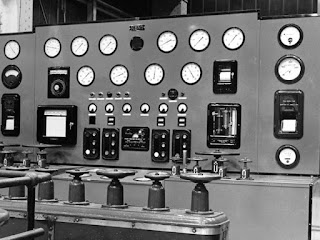