I thought that perhaps - for all our newer resident readers - that we should put something about what the riverside path used to be like.  Well it wasn't all industry - there was ART too.

The riverside walk described below dates from 2000 and was 'a local counterpoint to the Dome Festival'.

I have scanned part of the publicity leaflet - and -being an arts based production it is a bit of a funny shape which my (nice new) scanner is unfamiliar with.   The drawing of the Greenwich riverside is by Peter Kent - and, Peter I am sorry, I have had to scan it in chunks and it would look so much better if I could do the whole thing in one bit - but it would end up very very very tiny. 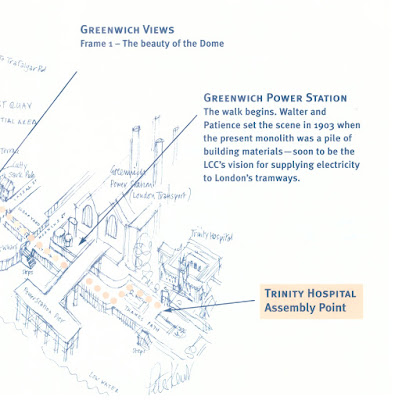 This bit will be the most familiar at the start of the walk.  It begins at Trinity Hospital - there is a sort of raised platform there on  the riverside and I seem to remember a big picture frame there which they put up so you could imagine where you were going was a 'picture'.  So we see the power station, and its jetty - and then the path carries on to Anchor Iron Wharf.  The flats were not built then and you had to walk down a little narrow path with a scrap yard either side - and then - there you were at Ballast Quay, 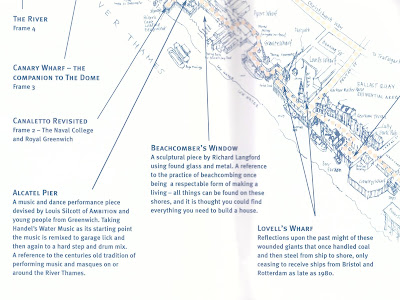 This stretch is the bit between Ballast Quay and Enderbys - then Lovells Wharf, Granite Wharf and Pipers. Pipers were famous barge builders and  the area was in use by the boat repair yard until very recently.

At Lovells were two huge cranes - Scotch Derricks - which had been left by the previous owner.  They were a local landmark and there were plans to keep them - but the owners demolished them early one morning without any prior notice. Here they are the 'wounded giants'.

The stretch illustrated also includes the Alcatel jetty and the group did a musical performance on it. It was just the same then as it is now - but it did have public access then, 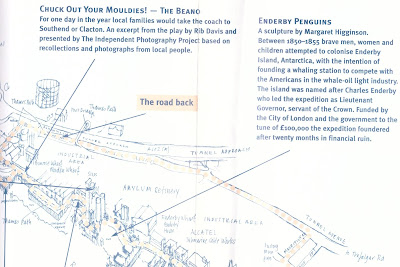 Further up and more wharves - And here we are at Enderbys where there was an 'artistic group' of Penguins - I seem to think they were plastic and floated about in the water.

Chuck Out Your Mouldies was the title of play which was put on locally with lots of local people taking part and based on memories of childhood in the 1940s and 1950s.  It was a lot of fun to do. The 'mouldies' was supposed to be loose change and children would call out to passers by to 'chuck out your mouldies'  and they would then scrabble for pennies and ha'pennies. 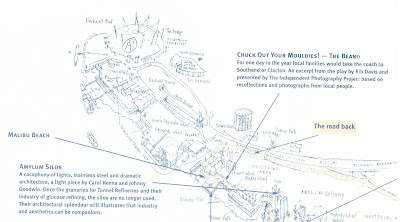 The Amylum Silos - something else the riverside has lost. This was a group of concrete silos 'which would make Le Corbusier weep with envy' [cf Owen Hatherley - thanks Owen that's a great quote].
Amylum was a glucose refinery and  was sold to Syrol who were/are French. One day a French demolition crew came in and demolished the lot - with never a by-your-leave, planning consent, a polite note to next door, or anything.  Silos were gone before we knew it. They cleared off back to France and left the site empty and open to all.

If anyone is interested in more info let me know.
Posted by M at 21:32