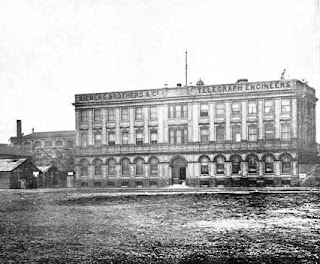 Siemens Brothers had one of the largest and most important works in Woolwich - which closed as long ago as the 1960s.  A consisderable number of buildings remain on the riverside on the Charlton/Woolwich borders.  The area is now being considered for a Riverside Conservation Area and at the time time there are news of Immunity for Listing Orders coming from the Department of the Environment.  The Siemens Brothers Engineering Society have prepared a huge amount of information to support this - and we have been sent copies and now have clearance to put them on this blog.  This is the first few pages - there is a lot more to come!! (and thanks for all this to Brian Middlemiss and his colleagues)

Charlton Riverside Conservation Areas and Locally Listed Buildings Consultation
Supporting Information
The Siemens & Halske Company was founded in London in 1858 and in 1863 with continued expansion bought a piece of land on the Thames in Woolwich and built on it a cable factory,  a mechanical workshop and stores. In 1865 Halske withdrew his support for the Company  and William and Werner Siemens took over the assets and re-registered the business as Siemens Brothers, London.
Siemens Brothers became a Limited Company in 1880 and pioneered research, development, engineering and manufacture of Electrical Cables, Telegraph, Telephone, Signalling and  Measuring Apparatus, Wireless Equipment, Lamps, Lights and Batteries. The Woolwich  Works [now the Westminster Industrial Estate] was bounded by Warspite Road, the Thames, Hardens Manorway and the main Woolwich/Greenwich Road and employed an average of around 8,000 people in the post war years. 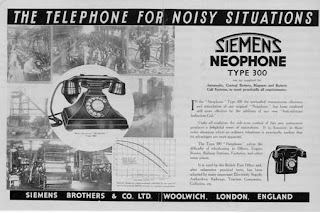 A large area of this site between Bowater Road and the main Woolwich/Greenwich Road has  already been lost to modern factory units and the new Greenwich University Technical College. It is therefore imperative that no more is lost and the remaining buildings should be conserved not only as the remaining legacy of Siemens Telegraph & Cable Works, one of the area's biggest industries and employers, which stood at the forefront of technological advancement in the international telecommunications industry, but because these remaining buildings represent a significant part of local heritage.
A book written by LD. Scott, printed in 1958 and published by Weidenfeld and Nicolson [London] provides a detailed history of 'Siemens Brothers 1858 - 1958'. This is a hardback book consisting of 279 pages and was presented to Managers as a part of the Company's centenary celebrations. and to demonstrate the significant role Siemens Brothers played in the telecommunications industry. This book has a pull-out map which details the development of the Woolwich Works, colour coded by building periods.

Cable: Siemens Brothers were one of the major cable making companies of the world between mid-Iv" C and mid-20th C, for underground and submarine use. The Company entered the submarine cable business in the early 1860's, laying cables all over the world. The Company also played a significant role in the design, development and manufacture of  the well-known PLUTO [Pipe Line Under The Ocean] cable, used as a 'pipe' to cany oil across the Channel to Normandy for use by the Allied invading forces. It was originally known as the 'HAIS' cable; H [the initial letter ofthe name of the instigator, Hartley, of
Anglo-Iranian] AI [Anglo-Iranian Oil Company] and S [Siemens Brothers]. The Company had its own wharf on the Thames at Woolwich and operated its own cable ship, C.S. Faraday,which was purpose designed by William Siemens.

Telegraphy: Siemens Brothers started with this product in the mid-Iv'" C; it being the firstelectrical form of communication and continued well into the 20th C particularly for ships.

Telephony: Siemens Brothers were one of the five Telephone switching equipment manufactures in the UK to supply to the Post Office who ran the nation-wide network. They also supplied world-wide. The UK's first electronic exchanges were designed and built by Siemens Brothers, called TXE-4 by the PO. When adopted by the PO, other manufacturers also produced these exchanges.
The Siemens Brothers Engineering Society. The Society was formed in 1897, the 50th anniversary of the founding of Siemens & Halske. It was a formally constituted organisation and Alexander Siemens was the first President being the nephew and adoptive son of Sir William Siemens. At the time of the formal
termination in 1968 [when Siemens Brothers closed] there were over 600 members.
The Society was re-formed in 1968 by two former officers of the original Society. 'A Society linked no longer by employment but by memories and fellowship.' The re-formed Society continued to meet regularly right up to 2013 when the age of the members dictated that closure was inevitable, this was 45 years after the closure of the Company! In 1991 the Society, realised that there was little information/archive material in existence around the local libraries about Siemens Brothers & Co. Ltd. This being somewhat alarming for a Company that had a business continuity at Woolwich for 100 + years, the Society set about accumulating its own archive.
Over the succeeding years the Society had accumulated such an immense amount of archive material, donated by Members of the Society, that it became necessary in 2001 to form a six- man Archive Project Committee. The work of this committee resulted in the publication of an Archive Material Catalogue which detailed almost 1400 items of documentation and  hardware. One hundred copies of this catalogue were printed [June 2004] and given wide circulation including six 'New Holders' of the archive material itself Some 80% of this material is held at the Greenwich Heritage Centre [GHC].
Subsequently the Society went on to produce a 'Supplement' to this catalogue, printed in October 2006, which detailed a further 300+ items, and given the same wide distribution. After this period the Society went on to produce its own history. This was printed in two parts '1897 - 2008' [October 2009] and '2009 - 2013 The Final Five Years' [July 2015], again both parts being given the same wide distribution as the archive material catalogue. .
Siemens UK Ltd. Siemens UK is the UK arm of the giant German Company Siemens AG. The former
Siemens Brothers & Co. Ltd and Siemens UK are often confused, same family but different Companies. However the Siemens Brothers Engineering Society owe a huge debt of thanks to Siemens UK. Following a chance meeting between the Society's Archivist and the Siemens UK Archivist at the old Woolwich Local History Library; Siemens UK went on to support all of the Engineering Society's activities from 1994 to its closure in 2013. In particular this included funding the printing of all four documents detailed above. Before this chance meeting Siemens UK had been unaware that the Engineering Society still existed.
The Siemens plc., [UK] had in 1993 published a book entitled "Sir William Siemens - A Man of Vision". This was in celebration of William Siemens who had begun building Siemens in the UK 150 years previously in 1843. The Archivist dearly wished she had been aware of the Siemens Brothers Engineering Society a few years earlier as this book also covers the history of Siemens Brothers & Co. Ltd., including life at the Woolwich Works, life on board the Faraday and the Cable Business. All Members of the Engineering Society were presented with a copy of this book. 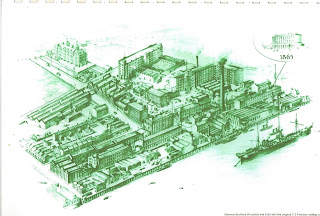 William Siemens was knighted by Queen Victoria in 1883, sadly only a few months before his death. He had provided communication to many parts of the British Empire via cable laid by the Company, enabling direct contact, for the first time.