Nothing to do but put more news items

ITEM ON THE GASHOLDER - AT THE BOTTOM OF THE BLOG!!!1

853 has published dire warnings of the foot tunnel being full up with cyclists by 2025 (https://853london.com/2017/11/08/greenwich-foot-tunnel-to-be-full-up-with-cyclists-by-2025-tfl-says/)
BUT we understand that a plaque has gone  up inside the tunnel to explain and commemorate the restricted section where it was bombed in the Second World War.
(and thank you Mark Hodgson for the pictures) 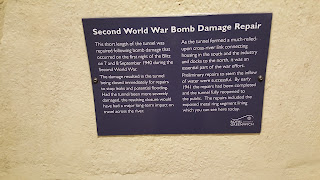 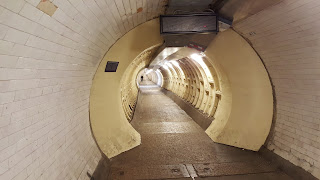 They have sent a list of events - leading with a notice of their Annual Forum on 16th November which will feature our ex-MP Nick Raynsford. This is at The Crystal (?? where's that??) and you have to book
(no details given but their web site is www.thamesestuarypartnership.org)

There has been some discussion on the Plumstead People Facebook page about the fate of the railbridge at Plumstead Station which looks to be going. See the page to see local views. GIHS's expert says:

"Network Rail will want to provide access for wheelchairs at Plumstead and by the time they've dug foundations for the lifts they might just as well install a new footbridge. A shame as it's a lovely example. . Once removal has become definite, with a projected date, We should let the railway preservation Societies know about it if it's likely to be scrapped. There'd almost
certainly be a taker if NR don't want to re-use it. They recently donated its larger sister bridge at Gravesend and I think they paid for relocation".

There has also been some discussion on the Plumstead People Facebook page about the fate of the lock remains of the Arsenal Canal . See the page to see local views. GIHS's expert says:

"The situation with the Royal Arsenal canal entrance lock and swing bridge is most unfortunate. The lock gates were either repaired or renewed in about 1953 and the bridge was given a thorough overhaul at the same time. It dates from c1905/7 and replaced an 1859 example.  The Greater London Council did much further work in 1982 including a new hydraulic drive system for the bridge. And that was that!
The gates are now heavily corroded, possibly beyond economic repair and the bridge sits on blocks, off its trunnions, yet appears to be in excellent structural condition. The lock area now belongs to Peabody who inherited it from Tilfen Land. They probably have very little interest, it's hardly their core activity. The lock, gates and  swing bridge are grade II listed

The whole issue of the Arsenal Canal is an important one and something we should look at carefully.  Can anyone help us with a history of it which we could publish to highlight its past??  What does the wider (and very very large) world of canal enthusiasts out their think about it??

They advertise
11th November Jim Marrett and Richard Buchanan on A date with buildings, and Wricklemarsh. Charlton House. 2.00

and news on:
Petition on Automatic Interim Protection for Buildings Proposed for Listing. which had gone to the Raynsford Review on Planning
Sun in the Sands Pub - the Council have refused permission to demolish it (twice)
Petition on the Avery Hill Conservatory - neglected by the University
Kings Arms Pub, Francis Street, objections to demolition
Crossness Engines - closure through asbestos discovery
Love Lane - and the very major campaign of objections to the Meyer Homes development at Tesco

15th November Open Meeting 7 pm Queen Anne Court, University of Greenwich
26th November Lecture on the Armada portrait of Elizabeth. You have to book through their web site. http://greenwichsociety.org.uk/

They are selling Christmas Cards in St.Alphege Church  £5 for 10

News on the opening of the viewpoint at the Point (off Point Hill) with a plaque on a pillar with a panorama by Peter Kent.

Aluna - article on this amazing scheme for a massive lunar clock on the Peninsula by Shane Brownie. www.alunatime.org  Shane is also part of their community network. Contact him for info shane@muttonbird.com

Westcombe Woodlands - this is the old chalk pit above Maze Hill Station - news of their open day and their bee hives.

Page with info on listing procedures and Planning

Historic Pillar boxes - they point out that Royal Mail have refurbished boxes in West Greenwich.

News on Greenwich Foodbank and its hub in Christ Church, East Greenwich

Article by Pieter Van der Merwe on the history of the border between the Queen's House and the Park. This is much much much more complicated than you could possibly believe!

Article on the Appleby Beam Engine in New South Wales - by - er - me. (and thanks Greenwich Soc. editor for publishing it)

Among lots of local items there is an article by Ann Hill of Wood burners as a source of pollution.

A feature on Gordon of Khartoum - who was a member of our local Enderby family. Some details of this article on the Enderby Group Facebook page.

Westcombe News carries an article on the Council's bid to become London's Capital of Culture. Their is currently a consultation on this run by the Greenwich and Docklands Festival and their have been local meetings. GIHS has taken part in some of these - and we hope others do to - remember that our industrial heritage is part of the Borough's culture and we need to ensure it is included in the bid.

Westcombe News highlight the retirement of Philip Binns from Chair of the Greenwich Conservation Group. This blog and its predecessor newsletter also have reason to be very grateful to Philip.  For 20 over 20 years he has co-ordinated the response on planning applications for local amenity and other societies.  He knows the system and he knows the Borough.
Blackheath Society had a party to celebrate this a few days ago - and this was attended by Mayor Peter Brooks - who told as how grateful he was for Philip's input when he was Chair of Planning and how grateful the Borough should be to him.

AND SO - TO THE GASHOLDER

The planning brief for the land on which the gasholder sits is going to Cabinet for ratification on 15th November.  This is a public meeting, people can attend and can register to speak.

This includes the results of the public consultation on the site - and an enormous number of people (I haven't counted) wrote in to say that the gas holder should be kept.  (thank you all of you).  Only one person wrote to say it should be demolished. There are also reports from various developers and local societies and national societies, as well as some statutory organisations, like Thames Water.  Of those able to comment none of them seem gasholder averse.  We are also aware that some people wrote in and for whatever reasons their input is not included.

The planners are now recommending " structures of heritage significance, in particular the gas holder, should be retained",

This is an important site and one which could be key to the future of the peninsula in providing a focus for non-housing sites and amenity.  It does not just feature the gasholder but the old Dreadnought School now owned and used by the Horniman Museum. There is also the old pub which was recently burnt down and is being rebuilt (without the proper planning consent apparently!!).

Perhaps - finally - we should add that Lewisham Council has just agreed to locally list the two Bell Green gasholders  - BUT if you go through the Tunnel and look to your right you will see only half of the Poplar holder which is being demolished.

Mary.. The Crystal is a display exhibition space located st the northern end of the cable car link from North Greenwich. In fact the cars virtually fly over the top of it as you get to the northern ‘station’. I believe it is operated by the Siemens company.

I quote from Wikipedia..

The Crystal is a building on Royal Victoria Dock in east London that contains a permanent exhibition about sustainable development. It is owned and operated by Siemens.