We have heard that there is an application to issue a certificate of immunity against listing on our great Gasholder in East Greenwich.   There are, of course, some good reasons why listing isn't always a good idea, particularly for such a large structure which would need alteration if it is to have a viable future - in its present state it would cost a fortune to maintain and have no useful purpose. However, if it cannot be listed then it can just be pulled down one day and - hey ho!!!  We don't know who has put this application in but we would urge anyone interested to immediately contact Sebastian.Fry@HistoricEngland.org.uk, and put your views - whether you are for it or against. You need to do this NOW

In the meantime here is a jolly little map prepared by the Enderby Group which points out that the holder is a useful focus point for a lot of leisure facilities on the Peninsula and with a bit of imagination could be turned into an exciting landmark. 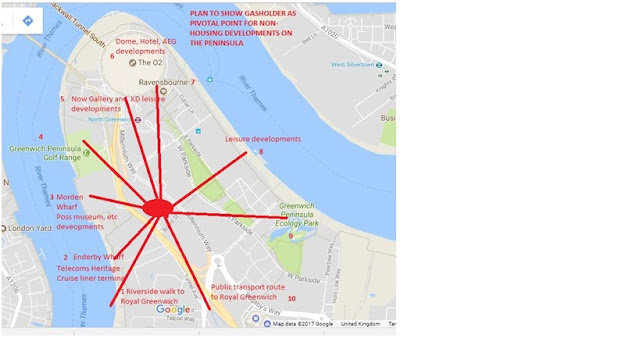 - this is the word from the REAL archaeologists who go round digging things up, (selectively). And they do it on the foreshore of the River.

Eliott Wragg reports on some of his summer work - in July in Deptford on the foreshore of the Royal Dockyard looking at a slipway which became visible in 2016 - and which they think is earlier. They also went to look at the pile of timber from 19th century warships at the end of Anchor and Hope Lane - go see this, it was what was left from a shipbreaking yard, huge great hunks of timber, just abandoned.
Elliot also reports that at Greenwich on the foreshore 'old features had washed away while new ones were revealed including a new windlass and rudder - all probably from 18th/early19th vessels.

There is also a report 'More erosion at Greenwich'.  This change has taken place since the sea wall was strengthened along by the Old Royal Naval College. There is a drop in levels by the King's Stairs and in front of the Bellot Memorial. More of the causeways have now been revealed and also a large chalk barge bed. They have found a base plate between the jetty and the steps . They hope to use photogrammetry (what's that??) and have some 3D models on show

Older Londoners Project - they are apparently running this with the University of the Third Age and have started a project with them called 'Sail to Steam' which will research the transition of wooden ship building on the Thames to iron   This will be shared with Riverpedia (what's that??)

Totally Thames Walks - the Greenwich dates for one of these is 22nd September 9.30 am £10.15 each  free if you are over 75
Remembering the Thames Tea Party  10th October 2-4 pm this is Silver Sunday and part of the older peoples thing. It is at Mortimer Wheeler House, N1 and you need to book  020 7410 2200 or email thamesdiscovery@mola.org.uk

THIS IS IMPORTANT TOO

We've all heard of cases where the word 'listing' is used about a building - 'we ought to get that listed' people say, and the next night it is mysteriously burnt down. Well, this is a petition against that sort of thing:
https://www.change.org/p/uk-parliament-give-automatic-interim-protection-to-buildings-proposed-for-listing?recruiter=137982560&utm_source=share_petition&utm_medium=email&utm_campaign=psf_combo_share_initial&utm_term=triggered&utm_content=nafta_email_shortlink_1%3Acontrol

The Society are advertising a talk on Blackheath Arts Club building which is now, inevitably, flats. In the 1930s it was the home of the GPO Film Unit where, under John Grierson, a series of groundbreaking documentaries were made, including Night Mail and - I think - Fires were Started.  The visit includes a talk by Steven Foxton who is curator of non-fiction films at the National Film Insitute. The event is on October 12th at St.Mary's Halls, Cresswell Park. The snag is that it is £10 bookable through www.eventbrite.co.uk - but they say you also get some wine (personally would prefer a cheaper event and no wine!! - if you come to Greenwich Industrial History its free for members and £1 for visitors).  The building was also used for making aircraft parts in the Second World War.

CABLES ACROSS THE ATLANTIC

The Enderby Group is concerned with the manufacture of the manufacture in Greenwich of the underwater cables which fed, and still feed, telecommunications around the world. In the first 80 years of the telegraph almost all cable, world wide, was made in Greenwich - and the research facility in Blackwall Lane remains.  The most celebrated cable was that which crossed the Atlantic - and the first three attempts failed. The cable was made in Greenwich and loaded onto Brunel's Great Eastern and taken to Valentia in Ireland - the most westerly point in Europe.  The cable was then laid to Heart's Content in Newfoundland.

We are also told that the cable station at Heart's Content is a museum, just across the road from
the cable landing.  There are photos at http://atlantic-cable.com/NF2001/hc.htm

The Group has learnt about a series of events around the Valentia/Hearts Content link.
On 27th July last year 3,071 kilometres across the Atlantic Ocean, identical marine bollards were unveiled simultaneously at Valentia and Hearts Content.  It turns out that this was part of a Festival in Valentia last year. This included a lecture on the Trans Atlantic Cable by Bill Burns  ( see his great web page http://atlantic-cable.com) and a launch of a book by Professor Donald de Cogan 'They talk along the deep: a global history of the Valentia Island telegraph cables" .  There was also the launch of a paper on a World Heritage Site on communications technology funded by Tralee and Kerry County Council.

Since then we understand the Irish Government is pushing for World Heritage status for Valentia and for this to be linked to Heart's Content. A statement by the Chair of the Valentia Transatlantic Cable Foundation says the cable was 'the equivalent of putting a man on the moon'. 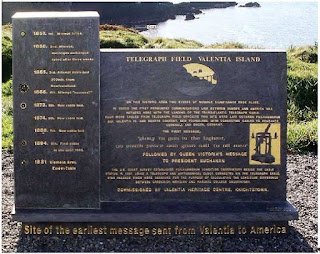 There are already moves in Heart's Content to make some sort of heritage link happen and declare the town 'as a twin heritage site'.

It turns out however that the 'Canso' building at Heart's Content was demolished a few days ago.  It was owned by a local group who were unable to raise the money for restoration.  See:

there are a vast number of other web sites on this, can supply if asked
Posted by M at 21:06

Mary.. It looks like Riverpedia is part of the Thames Discovery Programme (see http://www.thamesdiscovery.org/riverpedia/). Although appearing to concentrate on foreshore archaeology, nevertheless it appears to be very limited in terms of the Greenwich foreshore.