Notes, news and bits I missed out earlier


DON'T FORGET OUR NEXT MEETING

MATCHLESS - some bits of my note about Bill Cakebread's new book on the Plumstead Motor bikes and the Collier family were definitely missing from the last posting (someone came to the door!). The book carries on with a lot of detail about the Plumstead Maxey Road works- and how it went from, in the mid-50s as 'the best equipped motor cycle factory in the world' to find themselves losing races and closure in 1969.  The reason - perhaps I am my then boyfriend were typical - he sold his small Norton and bought a Honda 50, and quite honestly was much too frightened of the big bikes to take one on.

I was at the White Webbs Transport Museum this weekend - and the two Matchless machines  are in pride of place as soon as you walk in - no intepretation on them - if they are Matchless you are supposed to know and admire them. The trouble is that I suspect Plumstead generally has completely forgotten - and like everyone else think that motor bikes were made in the Midlands.

Some links to Matchless today:
https://www.classicdriver.com/en/article/bikes/matchless-reloads-legendary-model-x

- AND - PS - going down the old A20 and I see that Farningham Hill is back to its old name and no long "Death Hill"- when the boys on the big bikes used to go down to it to the ton, round the roundabout and - either back a hero, or dead.

So - Bill Cakebread, The Matchless Colliers. bvcakebread@btinternet.com £12 per copy plus £2.50 p&p

So -
John Phillips from FOGWOFT writes about the Greenwich Foot Tunnel.

"We've been puzzled for some time by the narrowed and reinforced  section of the Greenwich tunnel at its northern end. Urban myth is that it is a result of WW2 bomb damage. Turns out that this is the case.

We've recently received an email from Steve Hunnisett who runs blitzwalkers.co.uk , and has extensively researched bomb damage in this area, which reads as follows :

" [The damage] occurred on the night of 7th/8th September 1940 - the first night of the Blitz and known to Londoners at the time as 'Black Saturday.' The Metropolitan Borough of Poplar ARP Incident Log records four separate HE (High Explosive) bombs falling on the foreshore during that night adjacent to the tunnel, which left "Greenwich Foot Tunnel damaged and leaking." Fortunately, this occurred at low tide and temporary repairs using quick drying cement alleviated the damage up to a point, although the tunnel was immediately closed to the public. The repair that we see today involved the fitting of a 'sleeve' inside the existing structure that was reinforced with a concrete seal between the old and new structures. I understand (but do not know for certain) that the work was carried out by the LCC Flood Prevention Squad. I think that the detailed records for this work may be at London Metropolitan Archives, but I haven't gotten around to examining these yet - it's a very long list of things that I have to do!
I am not sure how long the repairs took to undertake but the tunnel was open for business again by mid-1941 I think.
You might be interested to know that Mick Lemmerman, in his excellent book "The Isle of Dogs During WWII" mentions this incident and tells of how some opportunist boat owners charged 2 shillings (10p) per person to ferry people off the Island immediately following the closure of the tunnel. A little later, a free ferry service was established until repairs were completed running between Johnson's Draw Dock on the Island and Greenwich Pier, with a temporary pier being built on the Island running across moored barges.The tunnel had a very narrow escape later in the war, when a V-1 Flying Bomb fell in Greenwich Church Street, close to the tunnel's southern entrance, which shattered all of the remaining roof glass and killed one person."

Our thanks go to Steve for providing this information

(thanks John for letting me reproduce this) 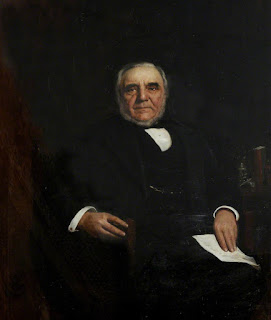 The picture above has been exercising the keen researchers in the Enderby Group more than a bit.  Its of John Pender who they are very keen to see memoralised at Enderby Wharf.  We've already published a piece on Pender and why we should remember him.  See below http://greenwichindustrialhistory.blogspot.co.uk/2016/09/the-cable-king-as-many-readers-will.html


It all began with another different and earlier portrait and a tweet by The Telegraph Museum https://twitter.com/ThePTM
- and which Allan Green circulated to the Enderby Group. It was picked up by Stewart Ash who intepreted it as follows

"This picture is of the current Lord Pender with the replacement portrait of John Pender by Hubert von Herkomer (1845-1914).  The first version of this was presented to Lady Emma Pender (in her absence) at a banquet to honour John Pender at the Hotel Métropole on 23rd April 1888.  The banquet was to celebrate him finally being recognised by the British establishment through receiving a KCMG.   John Pender thanked the assembled dignitaries for the gift, assuring them that his wife would like it.  However, when Emma saw the original she was not happy and wrote to Herkomer expressing her displeasure.   He was force to take the original back and make a second attempt.  The replacement portrait was delivered to Lady Emma at Foots Cray Place in January 1990 and was much more to Lady Emma’s liking.  As far as I know there are no images of the original portrait'.

So - what about this disliked original?  Stewart followed it up - and found it - in Wick!!

"I have been doing some further research into the Herkomer painting.  I did not believe that the original had survived Lady Emma’s rejection.  However, I asked Kevin Summers, the editor of SubTel Forum ... and he sent me a jpg. ....................I checked this and ................it is a portrait of Sir John Pender by Hubert von Herkomer and ..........I have now established that this portrait hangs in the Town Hall in Wick, in the very north of Scotland.  John Pender was MP for Wick Burgh between 1872-85 and from 1892 until his death in 1896.  There is no information on who presented the portrait to Wick or when, so there is another small mystery to unravel.

Incidentally I can see why Lady Emma preferred the second version!"

There is to be a Thames River Crossings Conference on 13th May next year - details will be around later. BUT I can reveal that the very last paper of the day will be Ian and me, from FOGWOFT, doing a bit, not just on the foot tunnels but on the London County Council tunnels (Blackwall, and Rotherhithe as well) as FREE river crossings for the people of east London.

In September the Group heard a speaker on the Massey Shaw - Massey was of particular interest in Greenwich since she was berthed here until developers arrived and she had to move on.  She was a London Fire Brigade fire float with Greenwich made Merryweather pumps - she fought the terrible dockland fires of the Blitz and played a major part in bringing men back from Dunkirk - and has sometime led the memorial flotillas.  Most of the talk was about her restoration in Gloucester and we hope to reproduce some of this here.  Sadly they say that new fire floats are being built in Canada rather than on the Thames (once the biggest shipbuilder in the world).

The October speaker was about barge carrier systems - most of the ports we have which can handle these are downriver these days. Again we could reproduce some of this talk, once I ask Sally for permission.