I finally managed to find the opportunity to do a bit more research on this story with the help of David Adams from Royal Parks, who raised the original query.


After much searching online for information, we located one file in the National Archives at Kew from the Office of Works (WORK 16/142B) which David viewed there.  This confirmed that Coalbrookdale did indeed produce the roof frame and that Deane & Co. assembled it and installed the iron columns.


Quotations for estimates and designs were originally received from five firms:


Deane & Co and Steven Bros & Co both planned to use Coalbrookdale for the roof.  W. M. Curl were the installer/sub-contractor operating on behalf of Deane & Co. 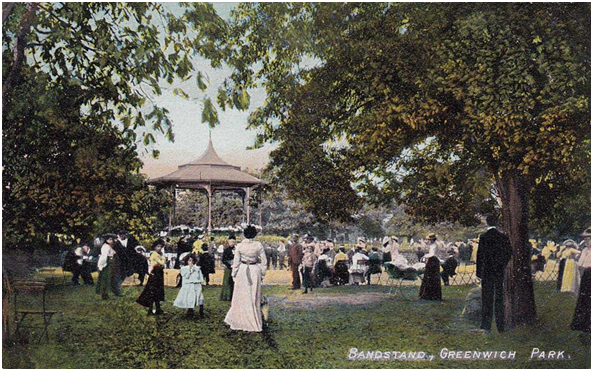 The bandstand was ‘opened’ in June 1891, with a performance by the Northumberland Fusiliers Band from nearby Woolwich.  The Kentish Messenger reported the event which took place on Thursday 4th June:
“A large concourse of people was attracted to Greenwich-park last evening, when the Northumberland Fusiliers, under Bandmaster W.H. Dencer, began the summer series of Thursday evening performances with a well-chosen selection of popular melodies. The chairs within the enclosure round the bandstand were mostly occupied, and considering the inclemency of the weather until nearly the time for the beginning of the performance the number of people strolling about within hearing of the music was very large.  The Park is just now seen at its best. The hawthorn and horse chestnuts are in full bloom, and light up the green turf and trees which the late heavy rains have helped to deck in luxuriant coats.”
The following week’s edition of the paper estimated that 5000 people had attended the concert.
I hope this finally solves the ‘mystery’.
(this is an update on a previous article by Barbara at http://greenwichindustrialhistory.blogspot.co.uk/2015/09/greenwich-park-bandstand-deane-and-co.html)
- or search on this blog for 'Bandstand'.
Posted by M at 05:23