The Dark Side of the 'Wonder' material for Submarine Cables

DARK SIDE OF FORMER 'WONDER' MATERIAL

Porthurno Research Fellow (and Enderby Group member) Allan Greene looks at the discovery and history of cable's 19th century wonder stuff and the impact it had on both economy and the environment .
This article first appeared in Porthcurno PK News No. 26 April 2005
In the world of submarine telegraphy we know gutta percha as the material whose discovery provided the near perfect insulating material for underwater cable applications yet there are deeper and darker sides to the exploitation of this wonderful substance.
The felling of tens of millions of huge trees started 150 years ago in the Malay Peninsula to feed the needs of manufacturers, primarily in the UK, who were using the milky sap from the trees to make everything from ornamental and decorative goods to ear-trumpets and from shoe-soles to chamber utensils for use in mental homes.


This was Gutta Percha.
Today Gutta Percha is barely known and very little used yet it was the one and only material which permitted telegraph cables to leave dry land and cross the oceans. Without Gutta Percha it is likely that workable long haul submarine cables would not have been a reality before the 20th century.
﻿


Until around 1850 only a handful of people had heard of the tree, or rather family of trees that produced the sticky sap that became known as gutta percha. The two main species known as Isonandra Gutta and Palaquium Gutta grew only in the dense forests of, what was then known as Borneo, Sumatra and the Malay Peninsula.
Although usually credited to Dr Montgomerie, a surgeon working for the East India Company, the first specimens of gutta percha were brought to England in 1843 and presented to the Royal Asiatic Society by a Portuguese engineer named Jose d' Almeida.


As well as some samples of the raw material he brought artefacts of Gutta Percha made by Malay natives including model animals, knives, hats, whips and piping as in the image above. Montgomerie’s samples arrived in London only a few months later and were exhibited at the Society of Arts. This was the start of several decades of 'gutta percha mania' when 1000s of tons were shipped into the UK and millions of trees were destroyed in the process. To better understand why this material generated such excitement it is necessary to look at things in more detail. The 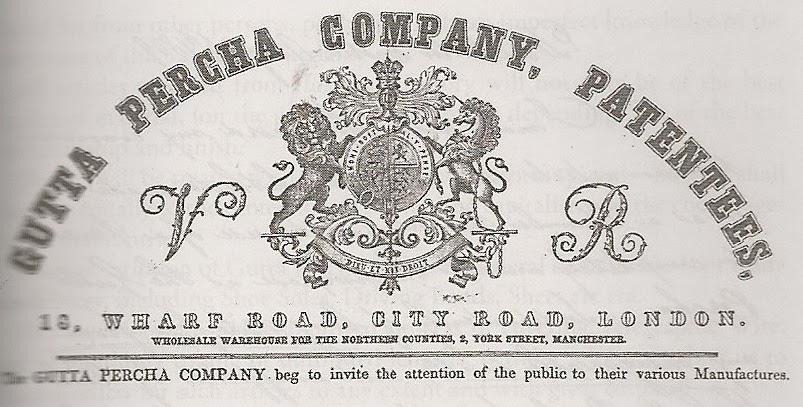 sticky sap did not flow easily as the tree trunks were cut or 'tapped' and each tree yielded only a small quantity. However, it was slowly collected and then boiled with water, cleaned and eventually formed into cakes of raw gutta that hardened in the sun. It was in this form that the material was shipped to England in the cakes or balls each weighing around 30 pounds. In its pure form Gutta Percha is quite light and, as was discovered during the laying of the first Dover - Calais cable in 1850, it actually floats in seawater
When plunged into boiling water gutta percha softens into a putty-like consistency and can be moulded into any shape quite easily by hand, and when allowed to cool becomes again quite hard and durable. It was the first natural thermos plastic material and it is this characteristic that differentiates it from rubber. A number of people in Britain -were quick to appreciate the potential for this new material and within a few years an incredible range of products was being constructed. - Charles Mackintosh, the waterproof clothing manufacturer was already using rubber in his manufacturing processes and it was one of his business partners, Thomas Hancock, whose brother Charles was to be the key figure in the development of Gutta Percha business.
﻿


There are many testimonies to the hardwearing qualities of Gutta Percha, not least one that related to its application as soles for shoes and boots. The military in particular seem to have appreciated the qualities of Gutta Percha soles and Rear-Admiral Sir John Ross R.N. was said to have issued a memo "TO SAILORS-especially those proceeding to the Arctic Regions, Gutta Percha will prove a WARM FRIEND" The applications to which Gutta Percha was to be put seemed endless and some items continued being manufactured for many years after the main Gutta Percha craze subsided. The 1855 catalogue illustrated truncheons made from Gutta Percha with a whalebone centre and these were still being made in 1926 for the Canadian 'Mounties' who found them to be a comfort when they found themselves on peace-keeping duties during the General Strike. One particularly interesting industrial application took advantage of Gutta Percha's resistance to some corrosive fluids. Bottles made from Gutta Percha continued to be manufactured well into the 20th century particularly for the storage of very dangerous hydrofluoric acid that could not be held in glass bottles.
Other items offered in the catalogue included: sheets of various thicknesses, round bands for driving machinery, tubing, buckets and bottles, hats, combs, skates (with straps complete), lifebuoys and ear comets.


There is little or no evidence to indicate that anyone was concerned about the massive felling of trees in Malaysia to meet this incredible demand. The trees were there, the natives were willing and there was money to be made! The trees from which the sap was extracted were slow growing reaching 65 to 70 feet after around 30 years and very importantly only produced seed and worthwhile quantities of sap.
Images show trees being tapped (as the local rubber trees were tapped) and the sap flowing from the diagonal cuts in the bark. In reality this was quite a different story. I said earlier that the sap did not flow easily and local natives quickly learned that if the tree was felled, laid horizontal and circular grooves cut all around the trunk the sap was liberated far more quickly. The 20-30 year old tree was thus destroyed for a pint or two of sap

According to contemporary records a fully-grown tree, 30 years old would have attained a girth of around 3.5 to 4 feet at the base and was expected to yield no more than one and one third pounds weight of clean gutta percha. This would seem to be a trifling quantity for the sacrifice of a 65-foot tree?


It's possible to get a better perspective on this devastation of the forests by looking at some larger scale statistics. In the year 1881 around 1250 tons of Gutta Percha were shipped from Borneo and a further 3600 tons from Singapore. That total of 4850 tons in the one- year represents the felling of no fewer than eight million trees and probably nearer 10 million.
We can also examine the statistics relating to Gutta Percha required for cable manufacturing only and as an example the Gutta Percha used on the first two successful Atlantic telegraph cables of 1865 & 1866. The total quantity manufactured was 3960 nautical miles that were coated with 400 pounds weight of Gutta Percha per nautical mile. Using the same formulae as above this represents a minimum of 1.2 million trees, or 300 trees per nautical mile of manufactured cable.


The biggest of the submarine telegraph cable manufacturers, Telcon claim that during the century 1850 to 1950 they (and their predecessors) had manufactured 315,000 nautical miles of telegraph cable. If, very conservatively we estimate that this mileage was coated with 200 pounds weight of Gutta Percha per nautical mile we come up with around 47 million trees.
This was for one cable Manufacturer albeit the largest in the world, in one country, for one application only, the insulation of submarine cables. Without researching official import records of Gutta Percha resin entering in to UK ports we cannot easily estimate the TOTAL number of trees which might have been felled to support the TOTAL quantity of Gutta Percha consumed but it must certainly run into 100s of millions!


Around 1915 Telcon as the major user of Gutta Percha for cable applications had recognised a need to take action to replenish the dwindling forest supply and set up a new company to cultivate the trees in Malaysia near the town of Kuala Lipis and this was named the Selbome Plantation Co Ltd (after the Telcon Chairman Lord Selborne).  Their plans were over ambitious and the company had heavy overheads resulting in an expensive end product and the situation became worse as the depression of the 1920s and early 30s hit the actual consumption of raw Gutta Percha. Production ran at around 100 tons of pure Gutta Percha per year. One very good thing did however come out of the Selborne Plantation venture. Applying a little more science than hitherto to the extraction of sap from the trees, together with investment in special machinery, it was discovered that the twigs, small branches and leaves of the trees could be pulverised and crushed to yield the sap without resorting to tapping the main trunk: or felling the tree. So seasonal and methodical plucking of leaves and pruning of new growth could permit extraction of around one ton of Gutta Percha per 30 tons of prunings. Alas it was all too little and too late!
After the war and into the 1950s new, mass produced (usually a by-product of the oil refining industry) and inexpensive, plastic materials were emerging to replace Gutta Percha for virtually all industrial applications. The leader was polyethylene that lCI branded 'Polythene' and which 50 years on is still the primary insulating material for submarine cables.

Gutta Percha was the first truly thermoplastic material which allowed the telegraph to pass under the oceans of the world and while we might shrink in horror at the terrible cost in terms of the utter destruction of so many mil- lions of trees perhaps there is yet another angle on this story. The wood of the Gutta Percha family of trees was soft, fibrous and spongy and of little use for construction and today at least one of the big areas where this ravage of nature took place is totally protected as part of the Malaysian National Park.


PS-  For the sporting ... 'Gutties' was the name given to golf balls made from gutta percha, which appeared around 1850. The Gutta Percha Company's   moulding room employed 16 men and boys in 1900 and was turning out no fewer than 100,000 balls,