Local Greenwich readers may be aware of a planning application to demolish The Old Loyal Briton's Pub in Thames Street.  We have been given permission to reproduce a submission by The Greenwich Society and the Greenwich Conservation Group to the Council for its inclusion in the Council's Local List of buildings of interest.   This submission includes interesting historical research on the pub and its setting.

The following represents a joint request from the Greenwich Society and the Greenwich Conservation Group to the Royal Borough of Greenwich that the above premises - in their present form - be considered for inclusion in the Council’s List of Buildings of Local Architectural or Historic Interest.

The Group became aware of the intention, should planning permission be granted, to demolish the present building on the site through the notification by letter, site notice and public notice (in the 5 August 2014 edition of Royal Greenwich Time) of application 14/1636/F. This as part of a proposal by Buzzgrade Ltd to build in its place a 6 storey block over a basement level providing A3 (Restaurant) use and/or A4 (Pub/Bar) use at ground floor and basement levels with 9 flats in the five floors above.The Group appreciates that, in the past, applications have been submitted and approved for extension works to the present building on the site - namely application 03/2594/F (approved June 2005) and a renewal application 10/0027/F (approved February 2010/now lapsed) - but, since both these applications retained and built on the existing structure, it was not thought relevant, at the time, to make a case for local listing.With the threat of demolition, this is no longer the case. 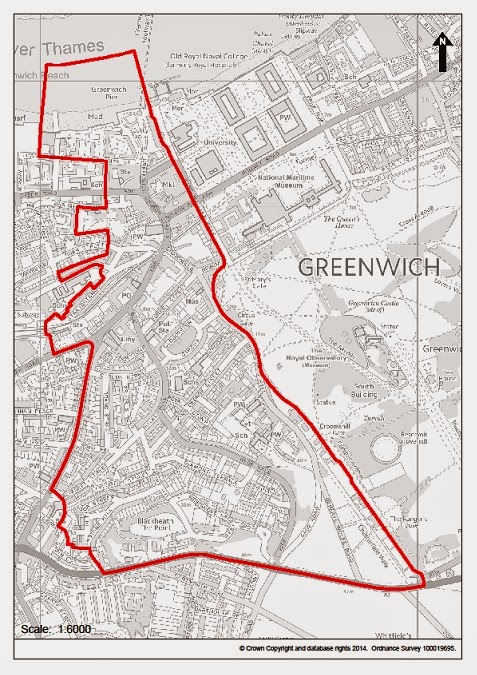 The present building sits at the western end of Thames Street close to its junction with Horseferry Place (formerly Horseferry Road). The site is in the West Greenwich Conservation Area and is in close proximity to the western boundary of the Buffer Zone of the Maritime Greenwich World Heritage Site and can be seen from the World Heritage Site itself in the long view from the Greenwich Church Street approach to Cutty Sark Gardens

Thames Street lies at the heart of what was, in Victorian times, an intensively developed riverine area bounded to the north by the River Thames, to the south by Bridge Street (now Creek Road), to the west by Norway Street and, to the east, by Church Street (now Greenwich Church Street) and the former Billingsgate Street, the line of which presently forms the western boundary to Cutty Sark Gardens.
The area was home to wharves and jetties on the river frontage and, in the immediate hinterland, there was a wide range of industrial uses such as a coal merchants, a hay and straw yard, a brewery, the base for the town’s fishing fleet and, in a myriad of closely packed streets, the homes of families associated with these industries - not least that of the fishing fleet.
Public houses featured prominently with some 10 in the back streets and a further half a dozen or so in the main thoroughfares of Bridge Street and Church Street - a list of those known to exist in mid-Victorian times is below.
In the mid 20th century the area was cleared to allow for the construction of the Meridian Estate, a series of municipal housing blocks, starting in the east, prior to the outbreak of the Second World War and to the west, after the cessation of hostilities when building restrictions were lifted. Some of the blocks were given the names of streets which originally filled the area - for example Coltman House and Rockfield House,

At present only three of the mid-Victorian buildings remain.  These are -
the former St Peter’s Church and Schools (now 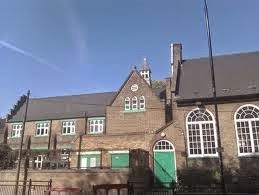 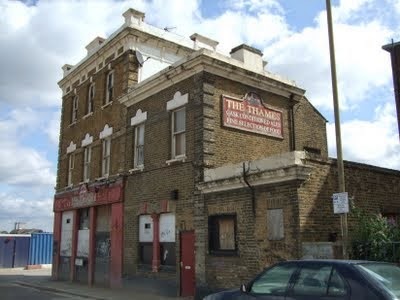 and the building which is the subject of this request

Further images can be found of this building and the surrounding Meridian Estate blocks on page 117 of the West Greenwich Conservation Area Appraisal document. 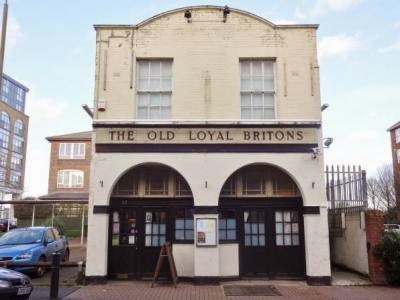 62 Thames Street is, above ground, a two storey building filling on plan virtually the whole of the 0.02 hectare plot with a frontage occupying, save for a side access area, the full width of the site while, deeper into the site, the massing steps back to provide a reduced width rear extension, also of two storeys.
As viewed from the street, the south facade of the building consists of 2 no. ground floor storey height semi-circular headed openings behind which is a traditional pub frontage screen consisting of timber framed windows and doors. At first floor level, there are 2 no. six over six pattern vertical sliding timber sash windows. The facade terminates in a shallow arched parapet masking a series of flat roofs behind. Between the ground and first floor levels is a traditional painted timber fascia with lettering indicating the current pub use.
The original stock brick facings at both levels have, at some time in the past, been either over-painted or rendered. The ground floor front facade is faced in render. The side elevations have no especially distinguishing features but are typical of mid to late- Victorian construction.
The interior has been much altered so that, at the front of the building, many spaces which would have been separate rooms have, over time, been opened up to create larger spaces better suited to the building’s more recent uses.
The external and internal fabric is in a reasonable state of repair.
There are suggestions that the tall arched openings on the front facade relate back to a time when the building was used as a home for one of the town’s early fire stations, perhaps as an appliance house. Since research into this suggestion is ongoing, certainty in this regard cannot be established.
What can be established is that beer retailing operations existed on the site as far back as at  least the early 1850s and the building operated as licensed premises up until the early 1990s.
Since that time the building was used variously as a restaurant and as a short-lived Chinese takeaway and gambling den. From October 2013, the premises have been trading as The Old Loyal Britons as a base for the East Wickham Brewery where it continues to trade - on a relatively short lease - brewing and serving cask ales, serving meals using locally sourced produce and offering a wide range of community activities.

It is said that the pub was given, for a time, the temporary name of The Lone Sailor in recognition of Francis Chichester who, in 1966, in his yacht Gypsy Moth IV single-handedly circumnavigated the globe. In 1967 Chichester was knighted in the grounds of the Old Royal Naval College for his exploits and, subsequently, Gypsy Moth IV was berthed, until 2003, close to the site of the pub at the extreme western end of Cutty Sark Gardens adjacent to the Thames Path.

Core Strategy policy EA(b) Pubs - supporting paragraph 4.2.30 to this policy acknowledges that “The architecture of a pub is often distinctive and over time these buildings have become important local landmarks and heritage assets”. It goes on to say that “Many of the buildings are statutorily or locally-listed for their architectural and historic value”.
Regrettably, The Old Loyal Britons public house has, to date, not been recognised as such.
Hence this request for consideration of a local listing.

In the light of the foregoing and in the knowledge that the future of the building is the subject of a live application which proposes its demolition, the Greenwich Conservation Group requests that urgent consideration be given to the inclusion of the Old Loyal Britons public house at 62 Thames Street on the Council’s List of Buildings of Architectural or Historic Interest. While recognising that the building is modest in scale and appearance, it is a vernacular building typical of its period and it is a remnant of the many domestic buildings which would have occupied the area. It does not deserve to be lost and a local listing would go some way to offering a degree of protection.

* - denotes pubs within the riverine area

She always referred to the Old Loyal Briton as "Tunkies". She was never sure of the spelling being so young at the time but this may have been a reference to the landlords name as opposed to the pub's name

Are you aware that as ofthis morning 15th October the Old Loyal Britons is boarded up and the present occupiers of the pub have been evicted.

I live with my wife the flats opposite, we saw it being board-up with the bailiffs on hand early in the morning, spoke to one on way to work- no rent being paid - sorry for them, lets hope something less noisy than the bar!

This is the third time this bar restaurant that has closed side we have been living here !


Cant Wait util they get on with knocking down and buildings new flats - there will be new pub and on the side up to the river 30 plus new affordable rent flats - I got my eye on one - see one of the new flats for rent at Capital key by the Waitrose - amazing for £82 a week ! they are all gone.

Can I say these Greenwich society poking their noses from elsewhere, who do they think they are ?- We are the society that live here long time. We want progress not living in around C**p - we want more people living here - In nice flats. Ps If you ask we don't mind posh people coming here to live - Having lived here for 30 years the neighbour hood is on the up - and the lo life is leaving - it was rough here then !