Ever since last spring we have been meaning feature an article in the April edition of that wonderful publication ‘Subterrania’ – the article is  ‘Chalk Mining near Blackheath Hill, Southeast London. Including Jack Cade's Cavern’ by Anthony Durham
Ostensibly it is yet another account of the caverns known to lie under Blackheath Hill but the author does raise some interesting points and tries to examine the subject holistically.  However, to begin at the beginning – he says ‘ten years ago I had very little idea what lies under the ground near my home. But that all changed on 7 April  2002, when the A2 main road through Greenwich  collapsed into a big hole halfway up Blackheath Hill’.  Having opened up his interest he began to look further  and discovered more.


He started offering guided tours of where the holes were but met with problems because of his unqualified status.  He also contacted the authors of a local blog about Underground Greenwich and says they helped him.  He says he read Harry Pearman's important work in Vol 6 of the Chelsea Speleological Society – but doesn’t indicate that he has ever  spoken to Harry, which is a real pity (Harry has published a more recent article on the caverns in Vol.44). 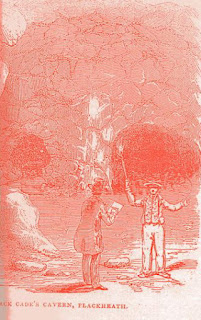 Returning to the 2002 A2 collapse he says ‘Transport for London and  Thames Water were essentially gifted a get-out-of-jail- free card by a plausible story that the lime burners of three hundred years ago were a bunch of cowboys who repeatedly caused trouble to the road managers of that time’- I hope that isn’t referring to my rather shoved together talks on it – I am certain I never mentioned the word ‘cowboys’ , although I might have my doubts about the level of care and honesty exhibited by 17th quarry workers – although Anthony Durham is ’inclined to stand up for those old lime burners near Greenwich, whose engineering and managerial skills, and respect for the  local community’ should not be under-estimated.


He gives the much quoted note about the activities of the Steers family  ‘In 1677 William Steers, Limebumer, was fined £40 for "not filling up, supporting and making good, safe, and  secure the King's Highway there against his Lime Kilns leading from Deptford to Blackheath, which said highway he hath undermined by digging, taking and carrying from  thence great quantities of chalk’ and so on. He pictures the Steers family ‘earning their living for generations on a patch of hillside that nobody much cared about, selling lime for rich people to build houses’
Returning to the 2002 collapse he discussed the spring line on Blackheath and the consultants' report paid for by Transport for London which explained that ‘most subsidence events are caused by water transporting soil particles underground and opening up ever-bigger voids, which finally collapse.’  But then he says ‘Unfortunately the report did a rotten job on the specific conditions of Blackheath Hill’ and adds that ‘little is known in detail about mining techniques used around Blackheath, even as late as the 1800s’.  he says ‘While digging into a hillside without modem machinery, miners will tend to create a vertical cliff or quarry workface with a horizontal area in front that is partly the floor of the digging and partly the top of a spoil heap’ and that ‘mining tended to transform hillsides’ . He then looks at the area around the hill and the landscape of cliffs and craters  - he is quite right, go out and look at it!  He asks ‘ how far those steps are man-made’


With reference to ‘Jack Cade's Cavern’  he discusses its exact position  and how it might be located by the casual passer by – but asks not to ‘pester (residents) in search of their underground cavity.’
As he points out the Cavern ‘has led an eventful life over the centuries, having been lost, found, lost, found,  and lost’ – and gives a brief history, including the inspection of it as a potential second world war air raid shelter .... ‘They found it exactly as their Victorian forebears had left it: graffiti, old bottles and all.’


He goes on to discuss some of the Blackheath lime burners and has unearthed some interesting  material from the Morden College archives. Has found other Steers – including a Liverpudlian ‘England’s first major civil engineer’ leading him to speculate ‘that Blackheath Hill was the real  nursery of British Engineering’. It’s easy for me to say ‘ of course it was’ – but Penn’s and their followers/trainees  were really mechanical engineers –and  I am not sure where we fit Perkins and his steam guns tests into this
He says, rightly, ‘Blackheath Hill is a whole landscape of industrial archaeology’  - and it is so well hidden by modern buildings and the traffic.


Read the article – and I would like to get Anthony Durham along to talk to GIHS sometime
Subterranean Britannica.  www.subbrit.org.uk
April 2012 issue 29 Edited by Nick Catford editor@subbrit.org.uk

Mechanical engineers were included with civil engineers until halfway through the 19th century. The IMechE was founded in 1847 because it was only then that mechanicals thought they were different enough. Until then 'civils' were so called mainly to distinguish themselves from military engineers. So it would be quite natural for what we now call civil engineers to diversify into what we think of as the separate technology of mechanical engineering.