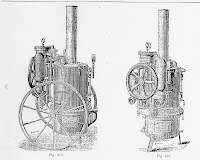 Thanks to Brian Sturt who has pointed out an article about the Merryweather's Valiant Steam Pump - in a magazine (previously unknown to me) called Vintage Spirit. The article is by Ron Henderson - and if you are out there, Ron, and read this - please get in touch and come to speak at one of our meetings about it!

He says that the pump was designed and first used in HMS Valiant in 1883 when a pump was needed to pump water from the shore to the ship - the pump was put in a row boat, taken ashore and wheeled to the water supply. It then pumped to the ship at 3,500 gallons per hour. It was a very successful design and thousands were made in Greenwich and sold over the next 50 years. The War Office alone bought 3,000. During the First World War the War Office took over the Greenwich factory (?? is this true) and another 2,000 were made for war time use. In the Second World War they made another 2,000 and they were known world wide as 'Little Merryweathers'. They also made a special posh version for railways and the fire service with lots of brass and copper finish,there was a heavy duty one for contractors and lots of other specials. They were used in at least 42 countries and were owned by a whole selection of Dukes and Maharajahs.

Clearly the people who preserve and do up old steam equipment can't get hold of enough of them.
Posted by M at 07:33

Hi there.
Could you please tell me which issue of the Vintage Spirit the article is in?
I have just been granted permission to restore a Valiant Steam Pump on behalf of the Sheffield Fire & Police Museum and would love to read this article to gain more information about the machine as at the moment the information I have is very limited.