Out to supper last night, and it was good to meet up with old friends from the Museum in Docklands. I wonder how many Greenwich people go there - and if they know how many of the exhibits come from south of the River. For instance, one very large exhibit is the wooden capstan which I came across in the long grass on the derelict gas works site on the Peninsula in the 1980s. It seems originally to have been part of the dry dock which had been built on the tip of the Peninsula in the 1870s, the remains of which must now be somewhere under the Dome. When the gas works was built in the 1880s they were required to take over the d 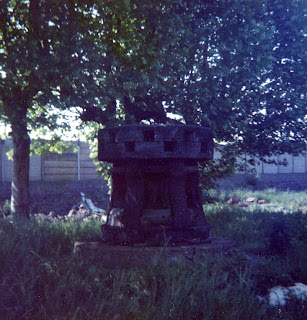 ry dock and eventually seem to have used it as a reservoir. They kept the capstan which stood on the riverside - perhaps as some sort of decorative feature.
When the gas works closed the capstan stayed there alongside one of the internal roads. Anyway, its just one of the many Greenwich sourced exhibits in this wonderful local museum which everyone should go and see - just get on the DLR, get off at West India Quay and turn left, past the Robin and its ahead and to the right.
Posted by M at 07:08